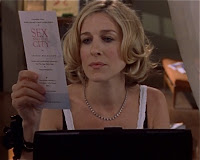 In Season 2 episode 27 called Shortcomings Carrie starts to date a fellow writer. We also see Miranda date a divorced man with a kid and Charlotte and Samantha fight over the fact Samantha sleeps with Charlotte's brother.

The question of the week is "When you sleep with someone, are you screwing the family?"

Right off I have to say about the episode, um why is the brother never talked about ever again in the series? You would think with two weddings and two babies the brother would have been a character that was at lest talked about in regards to visiting again, but he's never mentioned before or after this episode.

This episode deals with openness. Openness in our conversations, in our relationships, in our acceptance of those in our social circle, and how we prejudge. Charlotte does her best to keep Samantha away from her brother until she finds out after the fact that her brother's marriage died because of lack of sex.
Carrie finds herself in a better relationship with her new boyfriend's mother then the boyfriend. As both women are in the sex business (Carrie with her column and the boyfriend's mother with her documentary) which comes in handy as the boyfriend has an issue with premature ejaculation.

There is a scene where the boyfriend comes into the bedroom where Carrie is reading his book in bed, and talks about how sexy that is. That's a desire of any writer. To find our lover reading our work without us having pushed the manuscript on them.

And on a topic that sort of has nothing to do with sex, this is an episode that speaks to me more as a writer then anything else. I watched this episode almost on a constant when I was dating my ex The Actor few years back. As if I could magic(k)ally make him read my stuff.
When I told him about my writing, he was shocked when he actually did read some of my work and found it not to be light fluffy teen geared stuff. I was hurt that he thought I was only capable of writing for 13 year olds.

He had this idea in his head that just because I was a female writing romantic fiction (chick-lit) that it was like Sweet Valley High (dude that totally ages us too Eh? SVH books were so 25 years ago)

In this episode, all the women are catering to a man's ego, and having to deal with the extensions of that (the over bearing mother, the needy child, the deprived sibling)

When we get involved with someone are we getting more then we bargained for? And if so, are we prepared to handle it?

screen shot from actually from season 5
Posted by Domestic and Damned at 3:33 PM