What Would Carrie Do... part 5 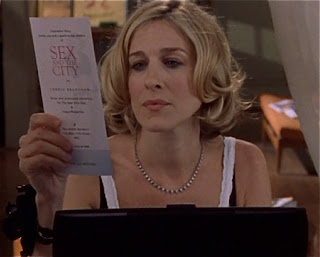 Episode 71 of Season 5, Plus One Is The Loneliest Number,  Carrie is getting ready for the party for her book launch.  This is the episode that introduces Jack Berger.
Samantha gets a chemical peel, Miranda lies to a former lover to have sex, Charlotte confronts Bunny, and Stanford introduces us to Marcus.  Carrie's question of the week is "Why does One minus a Plus one feel like it adds up to Zero?"
Carrie's editor from Vogue comes across in her scene as having it all and being satisfied with it, saying that you have to give up your idea of what having it all really means.  Later at the party scene she breaks down when she spies her lover at the party with another woman in tow.
It should have been called "it's my party and I'll cry if I want to"  but it wasn't.  It deals with the topics of being alone vs being lonely plus the snobbery that comes along with it.
Berger is set up in this episode as the perfect man, maybe even more so then Mr. Big has been.  He's cute, smart, and above all funny.

I'm finding myself drawn to this episode alot as of late. Part because I am struggling right now with my own novel (still only on draft 3 and looking for a new editor) part because I am taking a new look at what I think is having it all, and part because, of the idea of searching for the things we want but haven't reached yet.
There is a line in this episode where Carrie says the date with Berger was perfect in only the way a date can be when it's not a real date.
I don't think I've ever had that.  When Carrie admits that she's lonely, it's a raw moment that makes so many feel, not just for her but for Charlotte and ourselves.

Why do we feel the need to have it all in order to feel secure at all? Are we really better off with someone? And what price are we willing to pay to get there?
Posted by Domestic and Damned at 6:37 PM