So I should flaunt my Jokers?

Was just talking to my buddy Patrick about movies and stuff.
This of course after my post few hours ago about how immature I am.   Our conversations tend to jump from one topic to the other.   This however, came back to clothes.   Tee shirts to be exact.   Tee shirts with logos.

You all saw a photo of my spiffy new MotorCityMachine Guns!   shirt, and if not here it is.   Shut up I look totally hot in it. You wish you could pull off a look so dark and gloomy like that without coming across as a wannabe.  But you can't cause you're not me.  And I am the Queen of Your Evil Dreams! 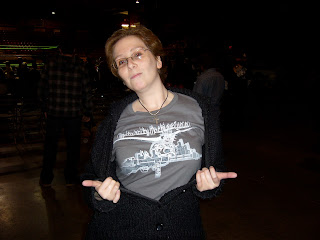 Somehow we got around to the best way to apologize to a guy after you have hurt his feelings.  Once again the idea of me showing my boobs was introduced.  This time in a slinky little nothing outfit.  One covered in .... Batman!

You think I'm playing, but I'm not.   I thought about this for a moment.   And you know what,  it actually makes sense in a twisted way.

Sex and comics.    What man wouldn't want that?   Even on me, how could it go wrong?
Everyone would be a winner (everyone being me and the guy and my buddy would be the hero for suggesting it)

So I think a trip to the lingerie store is in order... or at lest the comic book store for a new Batman shirt.
Posted by Domestic and Damned at 12:48 AM