What Would Carrie Do? 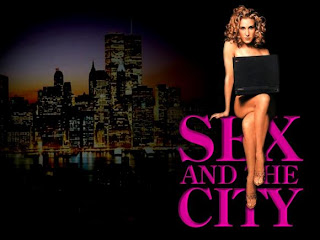 I have always fashioned myself after Sex and the City 's Carrie Bradshaw.  Or even Candace Bushnell for that matter.  Trying to figure out my love life the best I could.

I did over half my old blog  in the same style of writing that the character of Carrie Bradshaw did her columns on the show every week.  In a question.
I even did a series of posts where I referred to different episodes of the show.

Last summer, I started to date again.  The first time in 20 years (yes I'm ashamed to admit the last real date I went on was when I was 17 years old -until last summer I just did the "hanging out until it can be called a relationship")  I did a series of posts called "Are there any Single Straight Men Left on the Planet"  followed up briefly with "Dating 101 -Tips from the Non Dating Guru" when I had stopped the dating misadventures.   I tried to even do this on another platform calling the posts  "I Couldn't Help But Wonder"  but that just did not flair for me as well.

Well, here I am at age 36 still single, and once again faced with summer.   I have no intentions of repeating my dating life from last summer.  One summer of bad dates and high hopes or low hopes as each case turned into is enough for awhile.  But with the next installment of the SATC movies coming out in a few weeks, I thought I would start some of the posts on here again.
There is no point in rehashing last years posts, cause they are so last season.  But I will dive into the episodes of the show again.  Fresh takes on them, don't worry.  I won't (lest I'll do my best not to) rehash the romantic situations I compared them to in the past.  Besides, at any point you can click the link to the old blog and read them for yourself.
Posted by Domestic and Damned at 9:46 PM