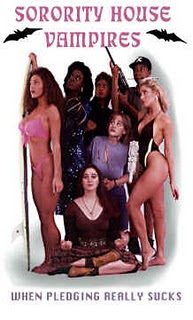 I was looking for a Dracula movie I had never seen before, but couldn't find one. I did however find "Sorority Vampires From Hell". So this is a bit of a replacement movie.
I can't believe I sat through this and it was only 80 minute movie.

Three girls have just joined a new sorority, and need to find out which of their new sisters is really a vampire. Meanwhile, Dracula who lives in the basement and his girlfriend Natalia are out to destroy the earth. If Natalia can claim 9 victims in 3 days she will become human.

This movie starts off with a 3D go-go dancing scene that made me question what kind of movie this was. It was listed as a horror. But after the first 2 minutes of a soft porn-ish scene where a large television displays a series of cartoon tentacles that look like jelly penises, I was thinking drugs would be nice right about now.
It's actually a slapstick comedy that makes fun of everything from Rocky Horror Picture Show to lip synced rap videos from the late 80's. There are wholes in the plot that you could drive a truck through and the sound craps out more then once.
However, the scenes with Dracula trapped in the basement and Jim the half vampire (he is in half a vampire costume and does an impression of Ash/Evil Ash from the Evil Dead 2) carry you through the rest of it.

Something to rent if you are having a big drinking party. Perfect for drive- in classic night too.
Posted by Domestic and Damned at 12:01 PM