I originally posted this on my old pagan blog on Nov 22 2009, and on my Coffins and Cookies blog on Dec 22 2009.
It's something that didn't get much readership on those blogs but, it's a post that I really really want some feedback on.

In season 3 of Farscape, episode Dog with Two Bones the lead character has to face his fears.
I have struggled with this episode more then once, it's by far my favourite in the series, and the one that hits me the hardest every time I watch it.
It' s the final episode for season 3, tying up some old storylines, but introducing both new ones and new characters.
An end and a beginning. And the wheel keeps turning. Death, loss, birth, rebirth, etc.

The lead character is feeling the weight of his friends moving on in their lives, following their own paths while he is stuck with nowhere to go, literally. As his space ship runs out of fuel and he's trapped, barely floating along.
Isolation.
And a moment of clarity comes to him as he sits alone, having named his fear and made his choice.

As the title of the episode suggests, he has two paths he can follow, the shinny one the dream or the solid one the reality. Does he continue to hope for his ultimate perfect ideal, or does he just live in the moment and be happy with what he already has?
They can't be combined, they can't be merged, at lest not without sacrifice. He chooses to live in the moment with what he already has, and realizes it's truly what he wants anyway. He makes the leap of faith and takes the risk. Only, what he wants is not inline at that point with what everyone else wants.

Fate has made him wait.

It's a hard episode for me to deal with because of what it stirs up in me. The first time I saw this episode it seemed to mirror what I was going through at that point in my life, a choice that ended in isolation. This episode popped up again in my life awhile later with a different situation that seemed to fit in with one of the subplots running through it, that of picking your truth from your fears. Intuition. Now, it has popped up again, at a time when I am not sure if I am even on the right path in my life. I have two different desires that are both so strong in me as to what road I want to travel in my life and they can't be combined, they can't be merged, not even with sacrificing something.

One of the main themes in this episode is meditation. Looking inside yourself and asking the real tough questions. 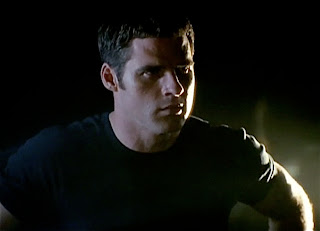 And that my friends is just one part of the Farscape Factor.
Posted by Domestic and Damned at 11:05 AM