iTunes  Canada had it this morning, and as you know if you read my post at that time,  I'm late because I went to see Sex and the City 2

Team 3D vs Ink Inc vs Nash/Young.   Non title.  Moore and Young started with a collar tie up, Young then working on the shoulder of Moore.  Young went off the ropes with a shoulder block sending Moore to the mat.  Back to their feet and Moore with two very deep arm drags which he followed with an inverted atomic drop. Moore then with a double leg drop going for the cover but only got a two count. Young then sent him into the corner, but Moore delivered a back elbow rocking Young. Moore then off the top turnbuckle with a flying bulldog going for a cover but only got a near fall. Jesse Neal then tagged in, and they used a double team move on Young, before getting shoved into the corner.  But Neal got a boot up on Young hitting him in the jaw. Neal then with a cross body for a cover but still only got a two count. Young with a rake to the eyes then planted Neal face first into the top turnbuckle. Young then had a large slam for Neal, at which point Brother Ray blindtagged himself in. Ray went for a large elbow but missed as Neal rolled out of the way.  Neal then fought back with a series of forearms to the face. Ray got things back in his favour with a nasty looking clothesline, before laying in a few loud chops to the upper body of Neal. Ray then had Neal in the middle of the ring delivering cross faces,  and Nash was in the far corner trying to climb it for I have no idea what but Young talked him down, Devon then blindtagged himself in. Devon tossed Neal into his corner letting Moore tag back in.  Devon and Moore then with a collar tie up which lead to Moore getting a few punches in before trying a sunset flip. Moore then with a flying kick stumbling Devon. Neal tagged back in,  as did Ray who used a double clothesline to knock down both Ink Inc. Neal in the corner again with Ray stomping on him, yelling that he's just not going to pin him yet.  Neal managed to get a gore on Ray for the win.   Nash and Young had started to leave the ring area, then for whatever reason Nash jumped back up with the tag belt held high.  Weird. 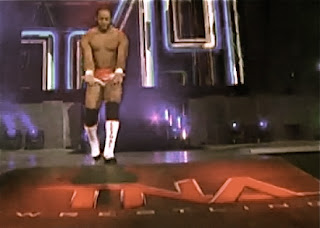 Kaz vs Jay Lethal.   I'm still giddy over Lethal being just Lethal, still doing a happy dance.
They started with a collar tie up. Kaz then started to just lay down punches on Lethal getting him against the ropes for a moment. Lethal used a nice kick, followed by a standing drop kick knocking Kaz down. Lethal then on the apron with a shoulder block to Kaz through the ropes. He slingshot back into the ring right into a leg scissors which tossed Kaz out of the ring.  Lethal then used a suicide dive nailing Kaz against the rails. And he screamed that he's so glad to be back. Back in the ring and Lethal goes for a cover but only gets a two count. Kaz then in the corner and Lethal with another drop kick sending him hard into the turnbuckles. Kaz then with a running leap and a knee to the back of the neck of Lethal, getting him off guard following it up with a few forearms to the face. Kaz then with a hard slam on Lethal and a springing leg drop, but Lethal used a few punches and a spring off the ropes into a flying forearm knocking Kaz down. Lethal followed this up with a running moonsault into a crossbody but only got a two count. Kaz then with a jawbreaker but Lethal quickly came back at him with a running kick to the back of the skull turning Kaz inside out. Lethal then slapped in a figure four leg lock but Kaz got to the ropes breaking the hold. Kaz used a roll up for the win.

Orlando Jordan vs Abyss. Jordan went right for the injured arm of Abyss, but Abyss managed to back away a few steps.  they then went into a collar tie up which quickly led to Abyss getting a wrist lock on Jordan.   Jordan turned it around in his favour by using a roll through then went right back to the injured arm Abyss did however, get a clothesline on Jordan knocking him to the mat for a moment. Abyss then with a large high backdrop on Jordan sending him clear across the ring. Abyss then charged after him, but Jordan moved and Abyss went shoulder first into the steel. Jordan then went back to working on the injured arm by ripping off the bandages and picking at the stitches. Jordan then went to the top rope coming down hard with an elbow to the arm of Abyss. Abyss then was able to fight back with a simple boot to the face of Jordan which he followed up with a splash in the corner.  Jordan then went for a float over in the far corner, but Abyss caught him in midair and slammed him hard in the middle of the ring.  Both men out of the ring suddenly and Jordan going face first into the ring post. Desmond Wolfe then came out and the match was called by a dq.

Wolfe vs Hardy...I debated if I was going to cover this one as I really don't like Hardy but I do like Wolfe so....  Wolfe started with a shoulder block, followed by an upper cut causing Hardy to stagger to the ropes. Wolfe with a snap take over then off the ropes with another shoulder block, and a cartwheel getting out of the way of Hardy.  Nice. Wolfe then with a leap frog over Hardy, but Hardy grabbed him for his sit down pin, only got a two count. Wolfe with a kick from the corner then an upper cut sending Hardy once again to the ropes. Hardy then charged at Wolfe, who moved out of the way and planted Hardy face first into the top turnbuckle before going for kick/chop combo to the neck of Hardy while having him in a modified hangman.  This is why I like Wolfe, he's quick thinking. Wolfe then going for his second rope speed bump, but was cut short by Hardy with a spinning kick. BOO. Hardy then with his running drop kick in the corner.  Double Boo. Wolfe rolled out of the ring, Hardy then with a second rope slide and a cross body onto the floor. Wolfe then elbowed him sending Hardy into the rails. Back in the ring and Wolfe goes for a cover but only got a two count.  Hardy going for his twist of fate but it was blocked and countered by Wolfe with a wicked looking arm-wringer snap. Nice. Wolfe went for a cover but again, only a two. He was going for his trademark tower of London, but Hardy blocked it.  Hardy then went for another twist of fate but once again, Wolfe blocked it and countered with his hammerlock.  Hardy in the corner with a scissors move rolling Wolfe across the ring. Hardy off the top rope with a corkscrew move that slammed into the ref, then he put his twist of fate on Wolfe, but the ref was down. Wolfe with a cheat move with a loaded weapon for the win. 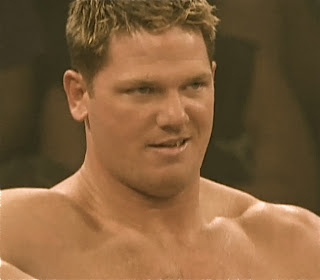 A.J. Styles vs Mr. Anderson.   Yay! Styles got rid of the cuff links.  He finally listened to me. I think Styles should be the number one contender to the belt.    They started with a collar tie up, Styles landing in the corner. He then got a side head lock on Anderson before Anderson reversed it slapping one on him. This went on for a few minutes, each trying to counter and ending up with Styles still in a side headlock on the mat. Styles did finally break the hold with a head scissors on Anderson.  He broke out of this move, and Styles slapped another side headlock on him. Finally, back to their feet and they traded forearms/chops for a moment. Styles then with a leap frog over Anderson, and a drop kick. Anderson then with a few punches, and Styles going for another leap frog, but was caught by Anderson who used a roll through going for a cover. Only a two count. Styles with a kick to the skull from the mat, and started to step on Anderson's throat. Styles then with a snapmare, and working on the shoulders and neck of Anderson. Anderson battled out with a series of punches then a flying forearm/crossbody combo. But Styles used a roll up for the win.
Posted by Domestic and Damned at 7:31 PM