And if you got to meet them? 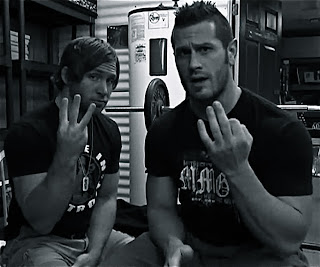 You know, I've said this before if I were to meet Alex Shelley, I'd most likely do something even more stupid then normal and drool on him or something right before screaming like a 12 year old at a boy band concert.
But Chris Sabin, I'd be a little more relaxed.  And this is because I've nagged so much on Mr. Sabin that talking about him is on the same level as talking about a buddy or something.  It's almost too casual now.
Weird Eh?

But then again, what would the damned really have to say to the damned?  (oh hush they love me. )
Posted by Domestic and Damned at 11:15 PM