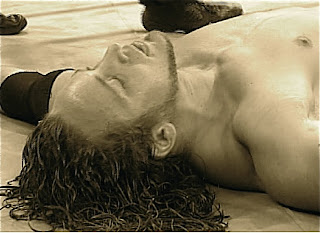 Sabin starts it with a slap to Williams, then a series of hard forearms to the jaw, backing him into a corner. Sabin then charged at Shelley, but was lifted into a powerbomb for his troubles. Shelley rolled Sabin up into a modified hog-tie before getting a drop kick to the face from Williams. Williams then used a basement slide on Sabin before turning back to Shelley with a series of fists. He was going for a irish whip, but Shelley turned it around sending Williams right into a mule kick from Sabin. Shelley grabbed Williams in what was looking to be a DDT, but instead climbed sideways across Sabin, still holding onto Williams. Sabin flipped over both men grabbing Shelley for a roll up. Williams broke the hold by grabbing Sabin and rolling him over in a pin. He only got a two count. Shelley then grabbed Williams for a flip but only got a near fall as well. 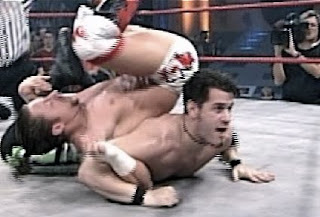 Sabin delivered a hard chop to Shelley taking him down in the corner before turning his attention back to Williams, sending Williams into the ropes then using a baseball slide to pull the legs out from under him. He used the top rope for a springboard to come back into the ring landing a stomp on the back of Williams skull. Williams rolled out, Sabin rolled out, as Shelley jumped the rope to land on the apron Sabin rolled back in. Sabin then used another baseball slide to keep Williams out of the ring, while Shelley monkeyflipped back into the ring. Sabin on the second rope got caught by a knife edge chop from Shelley just as Shelley suicide dived into Williams, causing Williams to go back first into the rails. Sabin made a beauty of a moonsault taking both men out and his shins in the process. Back in the ring and Williams planted a DDT on Sabin but only got a two count. Shelley delivered a sideslam on Sabin before adding the figure four head scissors on him. Shelley turned this into his scissors stomp. Beauty. Williams and Shelley then did a double team suplex on Sabin before fighting over a cover then trading blows. Sabin came back at them with a double kick knocking them both down. Sabin got Williams in the corner, leapfrogging over Shelley, as Shelley went for a shoulder block and ended up goring Williams. Sabin then went for a roll up on Shelley but only got a two count before Shelley tossed him off. Sabin landed shoulder first into Williams goring him. Sabin then used a drop toe hold on Shelley, sending him into a low blow on Williams. Sabin then started his cradleshock but Shelley wormed out of it giving Sabin a stiff kick to the back of the skull. Shelley landed a fabulous brainbuster on Sabin but only got a two count. 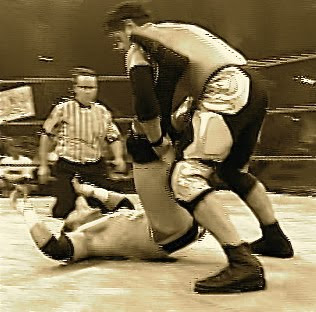 Sabin then hits a mule kick on Shelley before Williams managed to give Shelley a side russian leg sweep. Williams was going for his trademark Canadian Destroyer but Shelley countered and used a double team move with Sabin on Williams. Sabin turned it into a running powerbomb but the cover was broken by Shelley with a snapmare. Shelley then used a reversed neckbreaker on Williams before Sabin landed a kick to Shelley's skull then followed it up with a cradleshock for the win.

Originally posted on The Hurricanrana Report on May 1st 2010

Posted by Domestic and Damned at 10:53 PM