Seems iTunes Canada loves me again this week, as last night's episode was available this morning for download.  At this point though they have not gotten the May 3rd episode. Their listing jumps from April 26th to May 13th 2010 and for anyone who wants to know how long it takes to do a review, I started at 7:30am.

Now I know the episodes have titles just like Buffy/Angel/Forever Knight/Sex and the City  but I use the air dates cause 1) most people search online by air dates and 2) dude, most times your titles suck.  (it's good to be back isn't it)
To the audience member screaming alone,  you know why your "Bishoff sucks" chant didn't work for ya, because it's better to play in a group then play with yourself.  That and the faster we let Bishoff do what he's going to do the faster we get past the filler and on to the show... I love the smell of coffee and sarcasm in the morning, goes so well with my complexion.

AJ AJ AJ... we've talked about the cufflinks in the ears... dude, too big and you know I've never been one for diamonds I like pearls. Pearls are nice and less... sparkly. Men should wear Onyx or Jet.
Okay you know what, just cause I'm in a good mood this morning, I will actually mention Jeff Hardy just this once,  but um dude, please stop with the dry humping entrance.

Knock Outs match  Wilde vs Tara... Tara won with a kick as Wilde was going for a cross body.

Someone cue the garlic juice... for the tears that what's her handle was trying to cry... Universal Studios for freals sake, you would think you had some better acting .... nice set up though for the storyline. 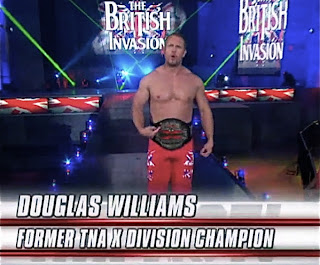 Kendrick vs Douglas Williams.   Kendrick still hasn't gotten decent theme music, dude you need to pencil that in okay... Williams made a speech about it being non-title as Kendrick jumped him in the corner with a series of forearms to the back. Williams fought back with a hard push then a forearm of his own rocking Kendrick. Tossing Kendrick then to the far corner, running full steam at him. Williams then followed with a snapmare but that only got him a two count.  Kendrick then started to throw hard punches at him before going off the ropes but was stopped cold by a shoulder block. Williams then used a drop knee to get the slight advantage over Kendrick, but Kendrick came back at him with a few kicks. Kendrick then off the ropes with a flying forearm/crossbody combo but only got a near fall. Williams then rolled out of the ring, and pulled Kendrick off his feet slamming his knee into the ring apron. Back in the center of the ring, and Williams slapped on a half Boston crab. Kaz then came to the ring to collect his belt, which was just enough distraction to let Kendrick roll up on Williams for the win.

Generation Me  vs Matt Morgan the evil druid... suppose I can't call him that anymore since he dropped the robe... in a handicap match.  Max and Jeremy jumped him as he was entering the ring. No good, he tossed them off like children and then delivered a double running clothesline that sent them flying. Morgan then grabbed the blonde one and gave him a hard vertical slam before going after the brunette with a nasty running boot to the face.  Still like to know what is it with wrestlers and long greasy hair? He then grabbed the microphone and blah blah blahed for a bit before grabbing the blonde one tossing him out of the ring and Samoa Joe came out to the ring giving Morgan a muscle buster. Then Nash and his crew came down to the ring, cashing in the fest or fired tag belts case.

Rob Terry vs Abyss. or you know not cause Abyss was being arrested. Snooze. Bored Now.
Okay here's the thing with Orlando Jordan,  no one is debating your talent.  We are debating your gimmick.  Dude, it blows goat backwards.  All puns intended.  Just drop the gimmick and wrestle.
Tomko came to the ring for a match then with Jordan. I happen to like Tomko.  He picked up Jordan slamming him into the corner then delivered a nice spinebuster.  Jordan countered with a double leg take down, then proceeded to deliver a few fists to the jaw. Both back to their feet, Tomko moved out of the way as Jordan went face first into the turnbuckle. Tomko then with a lovely powerful over head toss. Jordan then shoved Tomko into to the corner and followed up with a drop kick. He continued then to stomp on Tomko, getting him on the second rope for a rear chin lock. Jordan then with a short snap on Tomko before a knee to the back. He continued to work on the neck and back of Tomko with another chinlock.  Tomko back to his feet powered out with an elbow. Jordan leap frogged over Tomko but he got it with an extreme short clothesline from Tomko. Jordan then countered with a backbreaker. Jordan followed with a guillotine sleeper for the win.

Knock Outs match .... Sarita vs Tara in a revenge match....Tara won with a cheap shot.

RVD vs Hardy vs A.J. Styles... non title... you all know I am not a fan of either RVD or Hardy, just do not like watching them at all. So.... but Styles goofing around with the dude at ringside was funny, very funny. And Styles got the pin with the ropes... er um I mean I saw nothing but a win.
Because of the interruption of Mr. Anderson on Hardy, they had a small brawl at the end of the show.

OOOOHHHH does this mean Nash will be here tomorrow with the tag belts for the GNW event ?
And the MotorCityMachine Guns!  in a four way tag match.  Dude, I hate trying to call matches like this. You know, maybe if you guys didn't freal around at the start of the show with so much filler, you could have had two separate matches for the tag division. vs Team 3D vs Ink Inc vs Beer Money Inc.
Alex Shelley and James Storm started off. Okay Mr. Shelley what colour are your tights now? One camera has them looking blue and orange, one camera has them looking purple and an off orange. Someone needs to check the white balance on the cameras seriously. 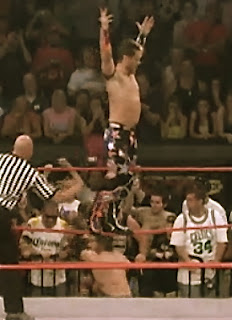 They started with a collar tie up, Storm pushing Shelley into the corner. Shelley came back with a series of forearms to the face getting himself out of the corner. Yay! Storm then tossed him into the ropes but Shelley went to the mat for a slip through and roll away. Chris Sabin tagged in grabbing Storm and throwing him out of the ring. The Guns! then delivered double mule kicks to Robert Roode as he came into the ring. Beauty! They then did their trademark suicide dive (Sabin diving through the ropes Shelley holding them) which is impossible to get a screen capture of I have to say. Did get a screen capture of Mr. Shelley celebrating the move. Sabin then rolled Storm back into the ring, but only got a two count. Damn it.  Storm fought back with a thumb to the eye and just tossing Sabin into the corner. Devon then blindtagged himself in, as Roode tagged in.  Roode came at him with a punch but it got him nowhere. Devon then took control with a series of punches. They then traded blows for a moment. Hang on, are your tights half blue and half purple? Roode took control with a knee to the gut, before Devon used a scoop slam/power slam for a near fall, Shelley in for a save with what I think was a ping to the temple. Brother Ray then tagged in, and they used a double team move on Roode. Shanon Moore blindtagged himself in when Ray got too close to the rope, flying over him in a crossbody to land on Roode, only got a two count. Mr. Shelley what the hoovers was that you crossing yourself dude... I didn't realize there were vampires in the ImpactZone that day. It looked like Moore had control of the issue, but Roode got him with a wristlock then a kick to the gut sending Moore into the corner then out of the ring.  Storm continued to do a beat down on Moore outside of the ring. Back in the ring, and Roode stompping on Moore, just before Storm tagged in and they used a double team back elbow on him. Beer Money then went for a wicked looking reversed backbreaker ... guess you call it a gut wrencher... Storm going for a cover but Brother Ray breaking it up. Storm then used an upper cut knocking Moore back down as Roode tagged in. Roode then with a snapmare on Moore before slapping on a chinlock. Moore fought out with a series of elbows then off the ropes for a sunset flip but only got a near fall. Roode answered with a hard running clothesline, but only got a near fall. Another tag to Storm, who used a few knees to the guts then went right back to working on the back and neck of Moore with another chinlock. Moore once again fought out with more elbows, then used a standing bulldog on Storm. Roode tagged in, Jesse Neal tagged in.  Neal with a series of short clotheslines and a large back body drop before turning his attention to the Guns! in the corner sending them off the apron with more clotheslines. Neal then used a frontal swing slam. (I'm not sure what else to call it) Only got him a two count before Storm ran in for the save. BMI then used a double team move on Neal, as Brother Ray tagged himself in with double running clotheslines on BMI.  Neal then used a schoolboy roll up on Ray but the Guns! in for the save. Guns! with their trademark stereo kicks to Ray, Devon then in with a series of punches to both Shelley and Sabin, before Shelley with a drop toe hold and Sabin with a standing flying elbow to the back. NICE! They then followed it with their trademark double teamed basement dropkick/semi-pull back. Sabin then with the stepladder dropkick on Storm in the corner knocking him off the ring apron. Sabin then on the apron was going for his wicked kick on Roode but Roode swept the leg out and dragged him down hard on the ring apron face first. Is Sabin okay? Slingshot clothesline by Shelley then on Roode. Back in the ring, Neal was pounding on the back of Devon in the corner before Ray came in with a hard punch. Neal then on the shoulders of Ray, Devon off the top turnbuckle for a flying short clothesline, going for the cover but Moore in for the save. Moore got planted in the top turnbuckle for his trouble. Ray then slapped Neal and charged at Moore in the corner, Moore got out of the way as Ray went face first into the turnbuckle. Moore off the top rope with a twisting neck breaker, Neal then with a gore for the win.
Posted by Domestic and Damned at 11:19 AM