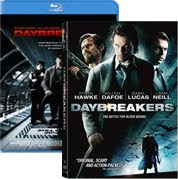 Edward is a vampire scientist who has less then a month to find the recipe for a blood replacement or the world's population will be dead.
Humans are already on the endangered species list, and soon the vampire will be too. The shortage of blood has led many to feed on themselves and each other creating a new breed of vampire who is more primal and more dangerous then anything they could imagine.

I always have preferred my vampires to be gruesome and dark. This film is smart and filled with just enough blood to make any die hard vamp fan happy.
It's set in the near future, 2019, in a world that has been run by a corporation instead of a government. With a mix of modern technology and 1940's style it's a smooth and believable ride.
Posted by Domestic and Damned at 8:44 PM