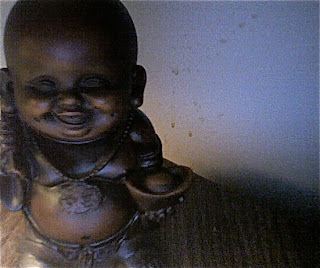 My sister is 8 years younger then I am.  Our relationship has been rocky at best.  There were two things that we connected on growing up,  Backstreet Boys and Wicca.
She just moved in with her boyfriend.  They have been together now for a year and a half, I've blogged about that over on Ramen Noodles  The other night, she called and asked me if I wanted any of the nic-nacks she had packed up.  I said sure. They were bringing over a set of tables anyway.  The box was filled with her Buddha collection. Well, half anyway, the rest she gave to another friend of hers.

Here's the thing.  I don't know how to react to this.  I love the little statues, and have been trying to collect some, but they are so expensive here.  This particular statue is $35 Canadian and it's only a few centimeters high.  The box was filled with the statues.  When I asked her why she was parting with them she shrugged and said her boyfriend is Catholic.

My sister is giving up a large chunk of herself by giving up her spiritual belief.  That pains me.  She's bending and changing for a man.
If your personal spiritual journey takes you down a different road because you feel it, that's one thing. But if you give up part of your core because your mate does not approve, that isn't right. I'm talking any spiritual path.

I asked the question on my old blog awhile back,  can you make it work within a couple if you are openly practicing two different spiritual/religious paths?   All I can say is I hope so, because I would never ask a man to switch to my religious belief, and I would not be able to switch for a man.

Oh and the stain on the wall in the photo, pomegranate juice. That stuff stains something awful.
Posted by Domestic and Damned at 9:56 AM