Remember your heroes are human 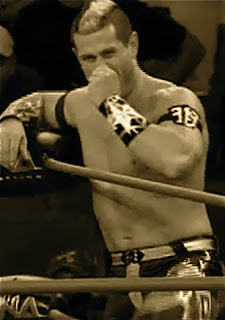 Yes, he is doing what we think he's doing during a match.  Mr. Shelley is picking his nose.  The episode for May 3rd was finally available for download on iTunes Canada, today.

2 and a half weeks late, and therefore irrelevant for doing a review.

But, I could not pass up this screen shot.  Oh hush, you so totally knew I was going to go there so don't even pretend that you didn't.

Hang on, it gets better it does.   He flicked it at Mr. Sabin.

Which brings me to a few things.

You lots of times  see the sweat just pouring off the wrestlers.  Add that to them spitting in the ring all the time and the snot factor, and I have to ask  buddy why on earth would you want to touch the mat?  Icky. Icky. Icky. Icky.  And did I mention gross.

Go on and say it already

Do you think he even noticed if it landed in his hair?   I know Mr. Sabin is going to kill me for this one. I hear him firing up the chainsaw now, getting ready to use my intestines for hair gel.
Posted by Domestic and Damned at 8:48 PM