Blurred out in September 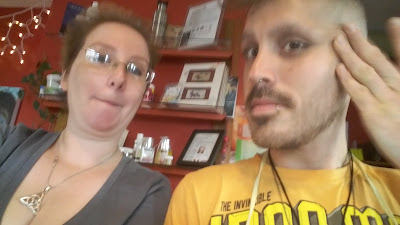 This just proves that no matter how good I think I am at taking photos, I'm really crap at it. Timing is everything, and my timing is so off.

Spudguns! Been way too long, which is a bad habit I've gotten into. I'm trying to break that habit, and a few other bad ones.  Some of you might know that all my blogging love has been put towards my movie blog the last few years. Where, not only do I talk about movies, I am part of a movie and food blogging group called Food n'Flix Club. Where we create dishes inspired by movies every month. And, where I've been writing my never ending soap opera. My blog not the food group silly silly spudguns!

Yes, I know, I have the crafting projects and the "supernatural style hunter's guide" crafts still to finish. They've been started...just haven't worked on them in a while. See, bad habits.

One of the things keeping me busy in the real world of not blogging, is that I've been doing tarot card readings. And I got to tells ya, sometimes, what you learn about people by doing these is not worth risking your time, energy or health. Still have a migraine from the last one the other day.

And this beautiful man beside me is Lady Fantasia LaPremiere, 2015 winner of Wiggins Wig Wars, and multi time winner of Queen of the North.  aka my buddy John. Who's ability to make a vegan chocolate and raspberry cake is a bad habit everyone needs to learn to love.

Posted by Domestic and Damned at 9:28 AM

The art of nothingness and cheese

Right off, there is no cheese.

There is however, art. Or more rightly, what I created in my art class today. Which is I think a Puffin. Or maybe a Seagull.  Something winged that flies anyways.You know how I said I needed an adventure few posts back...well today was one of my big starts. I joined a one day painting class, where we painted our spirit animals.  I was fully expecting to have some vision of a moose, or dog, or spider or bat, but instead during the meditation part of the class, I saw a ...rabbit. Yeah, a grey and pink cotton tailed cartoon style rabbit.

So why than did I paint a bird you're thinking?  Cause the class used certain techniques and there was no rabbit showing up in my lack of techniques. There was a strange "s" shape and some wavy lines popping up, and before I knew it, there was a bird.

At the end of the class, we did a show and tell. There were some beautiful paintings done by some of the other women in the class. Stuff you would expect to spend hundreds of dollars on. And the ages of  the ladies went from 11 years old up to 65 years old. I felt really good about what I had created, till I saw everyone else's.

All I can say is maybe there is some cheese in this post after all? 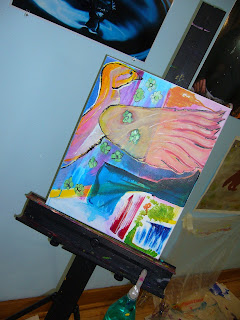 Posted by Domestic and Damned at 6:38 PM

Okay, I have been off my game lately. I should have been in while ago to post these.

Sorry guys, I haven't done my homework on how that will effect things, but given they all cross each other, I'm suspecting some really wacky effects this year. Remember, most of the planets sit in one sign for long periods of time, some a full decade. (Mercury, Venus and Mars being the planets that move monthly)
And we have a Full Moon this week on the 22nd. So plan your witchy-woo-hoo accordingly.

And the other stuff... 1) the hunter's kit. Yes, my lovely Spudguns! I'm still working on that inch by inch.   2) the hunter's adventures story...I've hit a wall. I think I already boxed myself in setting the first half in Nipigon.  I'm trying to write around the fact I've never actually been there...okay I've driven through there but never been there so I've sort of screwed myself cause I can't really give landmarks or for that matter, make too much up just in case you know?  3) I've had a bit of a health issue. I've had more blood taken from me in the last few weeks to make a vampire weep.

Posted by Domestic and Damned at 8:57 AM

In my purse next to the mojo bag Part 2

I was handed an envelope by the funeral director. Opening it, I saw it was from my aunt. She must have written it before she died.  Go to Nipigon Ontario ask for Ralph. That's all it said. Go to a city and ask for some guy. Talk about cryptic needles in even bigger haystacks. I had no idea what it had to do with anything? The only other thing in it was a key. No clue to what? Could have been anything, from a bus locker to a house. Luckily for me, it was only about an hour and half bus ride from Thunder Bay to Nipigon, so I could do whatever it was she had indicated by the note in one afternoon.
That was the plan anyways. Until I met the weird guy in the trenchcoat.  He claimed he was on his way east to meet up with some friends. Told me they were hunters. I thought he meant everyday type of hunters, you know the kind that rent cabins on the weekend and go ice fishing, that kind of hunters. But then he started in on a story about werewolves and creatures you only hear about in movies. That's about when the bus driver stopped on the middle of the highway because the cops were there. They had a road block happening. Wouldn't you know it, Trenchcoat got jumpy and decided it was time for him to leave. Never caught his name, but he handed me a small piece of paper, told me to go there when I got to Nipigon, and ask for Ralph.

Little more then a coincidence don't you think?

Posted by Domestic and Damned at 11:25 AM

There is a line in the movie Julie/Julia where, the Meryl Streep character of Julia Child talks about the years she put into the cookbook as possibly being something to do just to have something to do. This of course is right before she gets it published and is just feeling defeated and slightly depressed.

I have to confess, not that it will be much of a shock, that I've been filling my days with stuff to do, just to have stuff to do. My hobbies, projects etc. are filler. Nothing more nothing less.  I turn 42 next month. When I was asked what I regret not having done in my life, the usual came to mind. Not having had the chance to be married obviously at the top of the list, not having a kid, which is a massive shocker to even me given I hate kids, and not having traveled. The career failures didn't really hit the scale at all.

I think the big pressure is that this year is the tenth anniversary of the car accident. Sept 1st will be ten years. I had never seen anything beyond age 32. Literally, I knew I would die at age 32. And I did, for 90 seconds on the operating table the day of the car accident.

Well, now I think I look pretty great for a corpse.

I've played it safe for the last ten years, time for an adventure.

Spudguns! giving you a heads up, sort of.  We start the new year with a bang or fizzle depending on your point of view.
You've heard me say ...er seen me type, that we get on normal, 3 times a year Mercury retrograde, well this year we are having 4. And we jump right into the first one tomorrow. That would be January 5th and it lasts until the 25th.
The impact of the retro motion of mercury is as always: issues with travel, issues with electronics, issues with missed messages, more accidents, communications mishaps of all sorts, forgetfulness, money issues. You must be careful of injuries to the hands, arms and nerves as well.
So, Mercury Retrogrades in 2016: Jan 5th-25th, April 28th-May 22nd, Aug 30th-Sept 22nd and Dec 19th-Jan 8th (2017)

And it seems Jupiter, Saturn, Mars, Pluto, Neptune and Uranus are all having retrogrades this year as well. I will have to do some research into what they affect. I know Saturn affects lessons/rewards, but that's about all I know for sure.

I can tell you Jupiter goes retrograde on Jan 7th-May 9th. Which will overlap with Mercury and both a lunar and solar eclipse this year. Both in March.

There was a time I knew all this stuff, but sadly my interest has dwindled and I've gotten lazy with doing research.

Posted by Domestic and Damned at 6:55 PM

Spudguns!  We're two days into the new year and you know what, I'm already exhausted.

I finished reading that Supernatural book. Yay me. And started looking around at other fan's journal projects, and they are all replicas. Replicas.  Didn't really see any original stuff from them. Then I just got cocky and was all like "dude, I am totally going to rock this."  And this would be the part where you laugh nearly choking on your coffee.  I ended up not going with the typical style journal that they used for the props in the show, or that other fans had been using. You know, the three ring day-planner style. The kind that was everywhere back in the 1990's.
I ended up just going with a plain hardcovered journal.  Which now I'm sort of regretting because, it's not as practical.  I've managed some filler pages, mostly notes on the show and have two small paragraphs of story idea in point form notes.

And that's as far as I've gotten.  I'm finding it surprisingly difficult to come up with an original idea for this, with original characters. I keep reminding myself this is a prop that is part of a larger prop that apart from a few photos for this blog, no one will really see.  And that sort of stumps me. Way to create my own writer's block.

So there is only one thing to do. Take a step back, work on another part of the vampire hunter's kit prop, and start over with the journal part of the prop in a few weeks.

In the meantime, if you've been reading my movie blog, you know that I've decided to bring back the all vampire movie club on that blog this year. When I tried doing it few years ago, it was once a week. Which sort of got bit much. So this time, I've toned it down to once a month, with the bonus of an all vampire book club.  Currently, the month of January, the book/movie selection is the new version of Twilight.
I've got a few other bloggers joining in. And someone asked me why I picked this book?  Honestly, it was new. It's on the front of people's awareness, it's available everywhere and that was a failing I had with my last book club. The last time I did a book club, people complained I never picked new releases.

I know, I've got vampires on the brain this year. Even more so than normal.   The props and story are coming...just not as fast as I had hoped.

Posted by Domestic and Damned at 8:29 AM