Best of the Bugeaters (repost)


I posted this back in 2007 on my old vampire blog  Alucard's Rose. But I thought it would make a great post for the Hallowe'en countdown, and just to give this blog some more vamps. 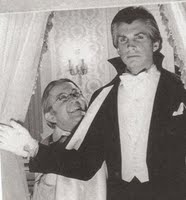 In most versions of the story, Dracula has a servant. A mad man who follows him around wide-eyed and grinning. Someone who can move about in the day when he needs to hide. Someone who once had a strong mind, and little real self esteem. Or so the character has been portrayed at times.
Not all of the stories follow that this character is a must, but the character of Renfield has earned itself a place in horror fame enough to even have an illness named after it. (Zoophagus or Zoophagia) The Renfield Syndrome : the act of eating smaller creatures like bugs, spiders, cats etc.
In the past 100 years, there have been four actors to play Renfield with such wit, structure and loneliness which is what gives them true horror.
Dracula Dead and Loving It : Peter MacNicol
Bram Stoker's Dracula : Tom Waits
Love at First Bite: Arte Johnson
Dracula 1931: Dwight Frye

Dwight Frye is by far the ultimate Renfield, hell he was the one who really gave the character a voice (hehehehehehehehehehehe) with his eerie laugh and mad ramblings, the first one to define the look of wide eyed innocence turned to fear, and the first one to be seen by millions.
Both Arte Johnson and Peter MacNicol did pretty much a parody of the Frye version, but in 1992 Tom Waits took a different stand on the character making him alittle more sane and stable.

Posted by Domestic and Damned at 8:48 AM