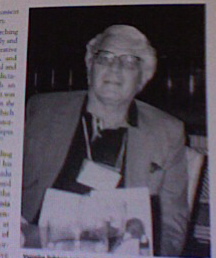 A history professor who wrote many books on the topic of Vlad the Impaler and Dracula. Some of his books included In Search for Dracula, A Clutch of Vampires, Dracula was a Woman, of which were co-written with Radu R. Florescu.

McNally was a leading scholar on vampires and folklore.  Born May 15 1931.   In 1961 he was named an American Exchange Scholar to the USSR and spent time there at the University of Leningrad. For ten years between 1964-1974, he worked at the Boston College in the Slavic and East European Center as director. In 1970 he was given full professorship.

In 1967, he was part of a group who discovered the real Castle Dracula (which lead to the first book collaboration with Florescsu in 1972) The first person to connect the real Vlad The Impaler with the fictional version Dracula, they then wrote their next book, a biography Dracula A Biography of Vlad the Impaler 1431-1476 . From there he worked on A Clutch of Vampires, and The Essential Dracula A Completely Illustrated and Annotated Edition of Bram Stoker's Classic Novel.

McNally then switched gears only slightly, as he started to research Elizabeth Bathory.

Posted by Domestic and Damned at 12:04 AM