We opened with a flashback of the last few weeks.  A new season, with new opening credits which I hate more then the last one.  Editing crew, I do not see how you can make me happy with the credits if you keep going in that direction. Actually, while I was watching this set of opening credits (which is all the Immortals/Fortune)  I was hit with the notion of there being an "episode" credits, letting you know who would be the focus that episode... am I wrong on that? Or have you just changed the credits to piss me off?

More talk that takes us to the fifteen minute mark (this is on iTunes Canada which does not have commercials, so we are talking closer to the 25 minute mark) before we get to a match.   The first match was Amazing Red vs Robbie.... Robbie won.   Okay he's got skills, he would not be in TNA if he didn't,  but please drop the gimmick.

Mick Foley was doing a book signing, and I thought it was interesting the way they brought Brian Kendrick in there as a fan, asking ... well asking the sort of stuff I would ask if it had been me.  The scary part of Kendrick,  I get what he's going on about.  Kendrick ... Intenders for the Higher Good? Thought I'd ask.

Fortune, please, stop it with the stupid drinking game. That's older then Flair is.  Dude, I don't even drink fruity girly drinks. 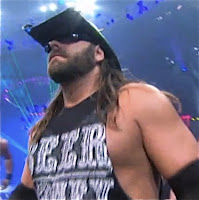 James Storm, mocking RVD.... dude good one. I do believe Mr. Storm got the line of the night "STD, or DVD or whatever his name is..."

You know I have a rule about not talking about the Knock Outs unless I have to, but dude, today I have to.  What the freal was that with Love and what's her handle... Winter?   Are we setting up for a Hallowe'en meltdown?  Is she suppose to be a stalker? or a ghost? or what have you?  (the rest of the Beautiful People left the room and Love started talking to someone in the mirror, only she poofed when the girls came back)  All I have to say to the writing crew on this one is what kind of drugs are you on and why aren't you sharing?

Pope vs A.J. Styles in a street fight.  Even though the rest of Fortune was banned, it was a no dq and Abyss came out to help Styles win.

Kaz vs Mr. Anderson in an Ultimate X match. Anderson was one armed for this one, and Kaz had all of Fortune on his side.  Kaz got the X for the win. That was the main event for the night.
The show closed out though with Bishoff/Flair in a car getting attacked by Kurt Angle. That is a much more fitting ending, as many of us were having issues with the carry over that was happening from Impact to Reaction.

I did not feel there was a match of the night, though Kaz vs Mr. Anderson had seemed like it might have been, it was just lacking.

And the MotorCityMachine Guns!   well, sort of.  Team 3D cut a promo stating why they are asking for one last match with the Guns! at the next ppv.  Then we see the Guns! hanging around backstage with Sky, the interviewer trying to get Chris Sabin to talk only ending up causing a distraction for Generation Me to attack them.  Sky pulled one right out of my playbook smearing food in the face of the blonde GenMe ... Jeremy... while Alex Shelley resorted to hair pulling.   Hair pulling. You read that right, which just adds to the whole idea that those two teenagers need to cut those greasy looking ponytails. Please, please make your next major match against GenMe a hair match... please Mr. Sabin and Mr. Shelley.
While I am on this topic, can I ask the stupidest wrestling question I have ever thought to ask... if Team 3D retire with a win over the Guns! what happens to the belts?  Do they get redesigned and the Guns! get new ones?  Would the tag titles be considered empty and a whole tournament have to start?  (oh hush I haven't had coffee yet)
Posted by Domestic and Damned at 11:20 AM