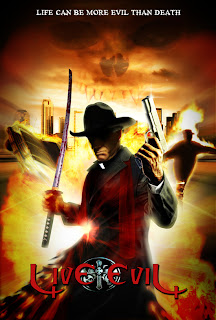 Plot: The world has gotten so polluted that the vampires are starved. Different breeds of vampires have not only started to turn on each other, they have sectioned off whole cities of the few fresh blood left and employ a blood pusher. One man knows about them and has made his life's work destroying them. At the death site of each vampire he's destroyed he's left his calling card, literally. Now he's tracked a small group of vampires to the heart of L.A. and this time it's personal.


Let me just say right off Tim Thomerson!
How can you go wrong with Tim Thomerson as your lead, well you just can't. The idea of this film is solid, and the fact they brought in a few different types of vampires made for an interesting dynamic with the level of emotion for each breed.
There are times when you are rooting for Benedict (like when he and his group are arrested by the other vamps or when he sees the goth girl poison the human) and times you are rooting for Priest.
This film made me think very fondly of Thomerson's other vampire films Trancers series (yes the debate over if Trancers are zombies or vampires will continue) and Near Dark.
This movie also reminded me very much of a book I read back nearly 20 years ago called Vampire Winter (radiation after the 3rd world war has poisoned humans making them mostly unsafe for vampires to feed from)

Keep your coffins crossed that there might be a sequel in the works.
Posted by Domestic and Damned at 12:09 AM