I very happily found a few episodes of Iron Chef American on youtube the other day.  One of the things that they did (it was Cat Cora who made it on Battle Cheddar)  was a homemade cracker using wonton wraps, chocolate and cumin.   She served it with a cheddar for a simple cheese and crackers.

It seemed perfectly easy.  You know what, it sort of was.   Only I had bought eggroll wraps instead of wonton ones thinking there wasn't a massive difference, and lacking a pastry/bbq brush, I simply used a knife to drip the melted chocolate on. and well anyone who's ever used cumin knows it smells like BO.  So stinky bitter crackers that tasted less bitter with large slices of old cheddar.
So here's me thinking,  let's replace the cumin with cinnamon for a sweet instead of savory flavour. Only I still did not have a pastry/bbq brush and had to remelt the chocolate as it hardened slightly.  It still came out bitter.  Mom actually tried the cinnamon ones.
I had sliced all the eggroll wraps already, so I just stuck the next handful in the oven without anything on them.  They turned out much better.

Mom agreed they needed something.  The rest of the package I took to mom's, found her pastry/bbq brush and added oil and salt and pepper.
Lovely!  Just lovely! 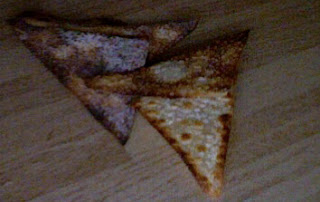 
Cut wraps in half,
Line ungreased cookie sheet with the wraps,
Brush oil over each,
Sprinkle salt and pepper over tray,
Bake at 350degrees for roughly 7minutes depending on your oven.

I plan on buying a package of wonton wraps today and trying them to see if there is a difference in taste or cooking time.
Posted by Domestic and Damned at 9:51 AM