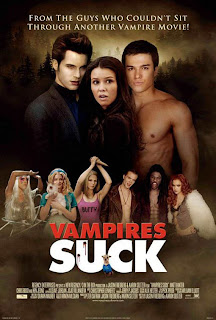 Midway through watching last night's TNA Impact on iTunes Canada,  I decided it was perfect vampire movie weather, all dark and thunder storms,  so I went to the cinema

Plot: Becca is the new girl to Sporks and there is something odd about the town.  Vampires run around openly feeding.  When she meets Edward she starts to think of nothing but getting him out of his promise ring. Soon, she's the target of a group of evil vampires and must survive long enough to save Edward at their prom from exposing more then just his sagging butt.  The whole while, turning down Jacob and running from his loyal teenaged groupies. Who will survive this in the end, Team Edward or Team Jacob.

I have to say, this was a light way to spend the afternoon.  Half the jokes are slapstick and would work well in any film.  Half the jokes are only useful if you have seen the Twilight Saga.
Casting did a great job finding look alikes to play the core roles in this film.  The best moment hands down is when Edward is depressed with a large vat of ice cream and flat hair.
Posted by Domestic and Damned at 6:11 PM