Do not watch Lesbian vampire films with your gay friends 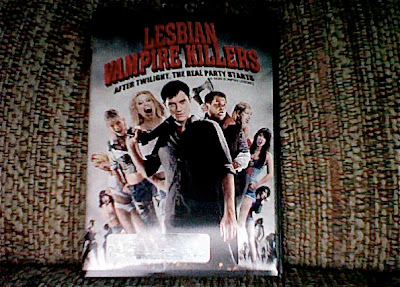 I love this movie.  Dude, it's funny. My friend Sophia and her girlfriend, were not sharing with the joy at all.

Plot: Fletch and Jimmy have both just been fired and dumped, and decide to have a vacation.  Both being broke agree on a hike in the nearby area.  Soon they find themselves sharing a cabin with a group of college girls.  The girls are there to study the mythology of Carmilla the Queen Vampire.  Unknown to them,  the villagers that sent them to this cabin have been cursed by Carmilla.  On the day of their 18th birthday all the women in the village turn into lesbian vampires.  The cabin is their feeding ground.  Unknown to Jimmy,  he's the last in a line of warriors who can defeat Carmilla and end her curse.  All he needs is a sword of pure steel that is penis shaped.

First off, I know this is going to piss alot of people off, but it was a fun movie.  Done in a comicbook style and in similar fashion to a Scooby-Doo cartoon, you know right off this is not your typical teen vampire movie.   It walks a line closer to From Dusk till Dawn then anything else you've seen lately.  (like a scene where one of the boys are in the bathroom and ends up in a fight with a vampire who's only trace after being killed are her implants)
I thought it was a brilliantly bold move to have the vampires not splatter red blood or black for that matter but infact.... white goo  when killed.  (I'm sorry I thought it was frealing funny stab the chick and she splatters white sticky stuff )
There is little to no seriousness to this film, just a lot of laughing.  A nice take on the Carmilla plot, which I have to say I haven't really ever been a fan of Carmilla movies other then Stay Alive.
The running joke that the only way to kill the queen is to "run her through with a large steel rod with a cock shaped handle"  did it for me, I was laughing for the entire film the first time I saw it few months ago, and was just giggling my ass off this round. (yes I bought it!)  My friends did not feel this movie was "productive to feminism".
My response to my friends was "Nether am I"

This is one of those vampire films that will become a cult classic for late night horror parties.
Posted by Domestic and Damned at 11:06 AM