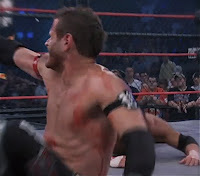 Alex Shelley covered in blood.  That's a vampire fans dream come true now isn't it.  Well, this vampire fan... I like my vampires gruesome and I think Mr. Shelley would make a hell of a vampire.  Well Um Yeah, you did read my short story He's Haunting Me.... didn't you?  Cause if you did, you would understand what I'm getting at.

Oh and Taz,  did you happen to watch Fandimonium Best of Beer Money Inc and the Best of MotorCityMachine Guns!  cause on this week's show you said the DVD was all filled up with matches the two teams had against each other, and I know it's been out for two months now, and I've only watched the BMI dvd once, but I can not for the life of me remember any matches the two teams had against each other being on either of the DVDs.  And I've watched the MMG dvd close to 20 times so... just saying.
Posted by Domestic and Damned at 9:46 PM