So I'm writing this zombie movie

I used screen capture for this post
If you have been reading my stuff for the last while you know that few years back I was trying to do a zombie/vampire movie.   And for many many reasons, it just never worked out.
Crew issues, scheduling issues, lack of talent with my actors, lack of any kind of budget etc.
We had been working on it off and on for 10 years.  Yes since 2000.
It was pointed out to me two years ago that my movie was cursed.  In fact it would seem I cursed it and myself by writing the plot to fail.

Don't think too hard.  Take it just as I said it, I wrote it to fail.

Anyways,  I was told  by an Astrologer, that a project I had on the back burner would finally get the green light.  Well, I was not even thinking my little horror comedy at all, I was thinking more along the lines of my novel which is stuck at the moment in a semi dead state cause of my constant writer's block.
And then the most genius thing ever happened.   I figured out what was wrong with my movie.  Yeah I'm a little excited right now aren't you.   So I've gotten a few notes done now on where to make major changes in my script.
And you're all on pins and needles wanting to know what the what is.   All I have to say is big kisses to Chris Sabin.

I was sitting here having a coffee and spotted the Aug 13th episode of TNA Today with the MMG  and I figured it out.  Dude, ironic too that it was a Friday the 13th episode and it inspired my zombie/vampire script.   And you're all wanting to know what did he do this time... actually all he did was raise an eyebrow.  Seriously.  All he did was turn his attention from the camera and raised an eyebrow, with a full on shot of his sideburns. The style  that I said looked like he was trying to look like a bad porn star from the 70's.
I know I know, what else can I say other then the boy is a gift for artists.  He's just fabulous. 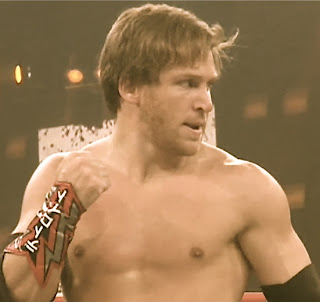 Posted by Domestic and Damned at 3:13 AM