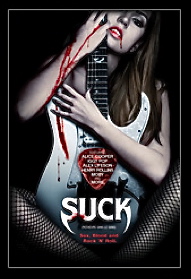 Plot: The Winners are a struggling band who just had their manager walk out on them in the middle of a tour.  While in Montreal, their bass player is seduced by a 300 year old vampire called Queeny.  Queeny has been turning musicians into the undead for years, and seems to be the best rock n roll manager they've ever had.  Soon the rest of the band decide to bite.  But their biggest fan happens to be Eddie Van Helsing,  a vampire hunter who's following them on every tour stop.


This film is genius pure genius!  With rock legends Alice Cooper, Henry Rollins and Iggy Pop and  Clockwork Orange's Malcolm McDowell how can you go wrong.
This film is set in the same vein as Hard Core Logo was. It takes it's subject just serious enough without coming off as cheesy or fluffy.  The soundtrack is packed from coffin to cross with hard hitting numbers, and the style is pure gloss on grit,  just what a vampire film should be filled with.

"Suck"  is a bit Queen of the Damned and a lot of Hard Core Logo, full on with a few rock video moments and surprising Canadian actor cameos (Danny Smith from Big Wolf On Campus plays a gas station clerk) that have you laughing out loud at just the right times.  Moby as a heavy metal meat freak was an interesting twist.