You're not Jay Lethal you know

Okay, I have a confession to make.  I need your understanding and support on this one, so you're only allowed to make me feel like crap for a moment.  But I had to cause I have an addiction that is even bigger then my addiction to Alex Shelley and Chris Sabin... my vampire addiction.

I'm sorry I let you all down but I had to, there was a matinee and the cinema was air conditioned.   I went and saw Twilight 3 Eclipse.   I know I know; after all I've said about the series and ... oh don't even look at me like that,  you knew I would Hello walking talking vampire encyclopedia over here...

Yes, I went alone.  No I was not the oldest person there.  But damn it I wish someone had told me it was BYOB... bring your own boyfriend, cause it was all couples.  All couples.  I had no idea werewolves were considered snuggle inducing.

So anyway... I went to see the film and right off I should have known cause it was just NOT a good day for a vampire film.  I did see the other two movies when they came out and it was perfect vampire movie weather both those times rain fog damp.   Today,  super hot sun with a temp of +30 celcius  feeling like +37 celcius with the humidex.  Kind of takes the mood out of it I'd say.
For anyone who's been following me for a few years on the old blogs, you know I got suckered into reading the books.  I had an agreement with my cousin Wendy and well I'm still waiting for her to read Renfield by Barbra Hambly.  Of the Twilight books,  Eclipse was the only one I liked.  I still say Stephine Meyers strength was her werewolves not her vampires.  Her vampires are crap but her werewolves were fresh and brilliant as far as creating something with an edge to it.

What does all this have to do with my title you're thinking.     Well, my Spudguns,  there were these five very loud rude teenaged boys sitting right behind me with their just as loud and rude girlfriends, and every time someone would enter the cinema screening room they would stand up and and scream "Team Jacob".    Two of these team Jacob members decided they needed more junk food and started to jump over the rows of chairs to get to the door.  One of which fell face first and tumbled down the stairs between the rows.

I could not keep my mouth shut when he did and said "That's what you get for thinking you're cool. You're not Jay Lethal you know." 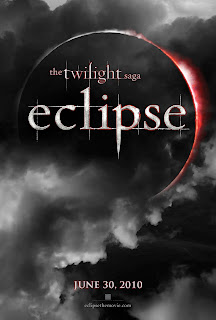 Posted by Domestic and Damned at 12:22 AM