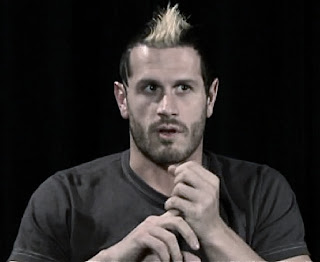 Hold up, this will be a long post  better grab a coffee.

I went to my mom's to do the baking we were suppose to do the other day,  and took my Best of the MotorCityMachine Guns!  dvd with me, cause 6 hours hanging with my mom without something to distract me would be murder inducing.
Mom has never watched TNA with me ever.  She's watched WWE but never TNA, so I thought what a brilliant way to show the difference in the whole idea between companies then to have her watch the match from Genesis 2009 between the MMG for the belt.  So I cue up the dvd to that chapter and actually get her to pay attention, and of course it starts with the little in studio interview and mom's mouth dropped open.   Now,  She's seen screen shots of Mr. Shelley on my blog and has made many comments towards him, some printable some that would make my rude comments look like Sunday school verses.  Oh yeah the women in my family all agree Mr. Shelley is the hottest thing ever even my sister has raised an eyebrow for him.   And the first thing out of mom's mouth was "Oh my god is he sick? His face is just shallow. Does he ever eat?"

*clears throat*  "That's what I've been asking on my blog for months"  I reply to her.
I think it's safe to say, Mr. Shelley were you ever to end up in the same room with a member of my family, food would be forced upon you without mercy.

Anyway,  for the first time ever,  my mother sat and watched the match... in silence!  Oh My God!  my mom quiet for more then ten seconds.  I wish I had taken my video camera cause, my mom talks more then I do, and I talk non-stop.  And when the match was over she looked over at me with this look that was not really shock but not really giddiness either, and said "That's what I call wrestling.  That's the kind of stuff Dad (my mom's dad) used to like to watch. Now I see why you're so hung up on TNA. That's real wrestling."

I nodded and made a comment about "now you understand why I have been supporting TNA on my blogs. Now you get why I'm always on about Alex Shelley.  He's the best wrestling right now. I believe in the last 15 years."