Maybe I do want one of those?

You read my last post you know I had a bad night once again with insomnia.  Terrible gibberish waves of paranoia madness.  Well, somewhere between the staring at the ceiling at 3:13 am and actually waking up this morning, I had an A-HA! moment or maybe it was just period cramps  difficult to say.

To have a kid.   I'm still kind of holding out for the end of the hemorrhaging  like a water buffalo to see if the emotional desire to have one goes away.  Keep your parts crossed that this is just a moment of total insanity and that it goes away.

I feel sorry for my buddy Patrick as he got stuck with my crying and sobbing all morning over the idea of me as a mom.  Scary I know.  You'll know the end of the world is truly coming down upon your heads with dirty hellfire and brimstone when   Holy Anne Rice Novels Batman talk about a Freudian slip.  IF I were to ever end up pregnant.  Total Omen child it would be.  Sir Omen.  Damien of Death.   See even when I have something serious to say I can't be serious about it. Hence the Domestic and Damned title.

But yeah, I woke up this morning and was like "Oh my god! I'm 36 and not married and I don't even have a little gremlin to call my own"   Then I got to thinking.  I know I said on the old blog once that I'd know I had truly fallen in love when I met a man who made me want to have a kid.   I can with all honesty say  "Na, that wont' be it"  So, I started thinking about what kind of man I would like to have a little Omen with.   And a few celebrities flashed before my eyes.  Settle down,  not who you think either.    But no average ordinary guy would do either.

In my family, as is with most Newfoundlanders,  the average age to get knocked up is 17.  The average age to get married is 19.  The average age to have your first divorce is 25.   Given I am 36 and have done none of those, I'm a bit assbackwards for a Newfie.   A nice medium sized Newfie girl is expected to marry a nice Newfie boy and have a litter of puppies.   Here is another hole in that theory,  most Newfoundlanders are now related to each other with all the round and round, so it's impossible to walk in the muck.  There must be some fresh DNA if I were to ever have a little Omen of my own.
Newfoundlanders are descendant of British and Irish,  I think I need to find me one of those.  Yes, just for the idea of the Omen.  I know it would be funny to see me slid up to some dude and try to dazzle him with my vast knowledge of nothingness and vampire movies.

Well, again though I am just scaring people out loud.  As I do hope this desire to have a kid does go away at the end of the week.  And stays away not to return next month. 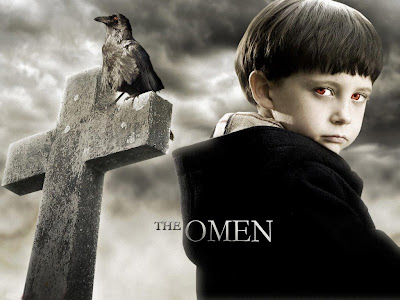 Posted by Domestic and Damned at 9:43 PM