Those belts are shinny 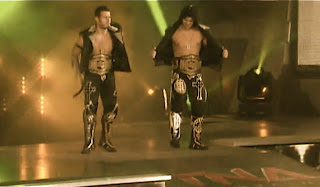 That; as I said in this week's TNA review (July 15th 2010 episode)  is a thing of beauty, seeing the tag belts around the waists of the MotorCityMachine Guns! 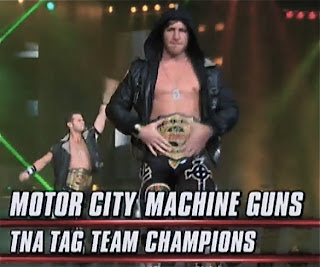 I just do not understand why it took so damned long to get those pieces of jewelery around their bodies?  I mean in my viewpoint they should have had the belts a few years ago. 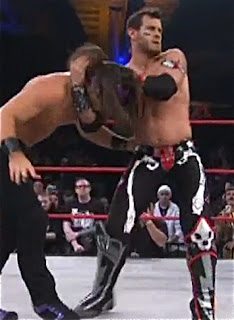 Actually, these new tights are good, I will always prefer the red ones but that's just me.

Now, as I mentioned the other day,  I had a poll going for over two weeks asking the TNA fans and my Spudguns who they thought I should start nagging and pushing on this blog, since I said I would stop nagging the MMG   if they   when they won these belts.
Here's the issue... the polls have been messed up for a few weeks and there are a hell of alot of angry Bloggers wanting to know what's going on with the polls.
I know that it was a landslide with the votes that I did get saying that I should continue to talk about the MMG.  I also know, since the poll was not counting proper, I do not have a proper reading on the votes.
This puts me right back in the starting line actually.

So what do we do?

I said I would stop nagging Mr. Sabin and Mr. Shelley (which I am wishing now I had not said as I can see a whole new doorway of nagging opening up with their win)  as it's been  a few  years, and there are many other wrestlers who could use a bit of a push (Jay Lethal, Eric Young, Doug Williams for starters)
But... I like them too much to really stop. So I'm just not going to stop totally.  No that my Spudgun does not make me a liar, that just means as a woman I used the age old "I've changed my mind"  routine on you.
Yes I know  women= evil   yes yes yes.  Okay what do you want me to say other then  but what would the damned really have to say to the damned.   Oh come on you know you want me; you love me I'm the Queen of Your Evil Dreams.

Posted by Domestic and Damned at 1:49 PM