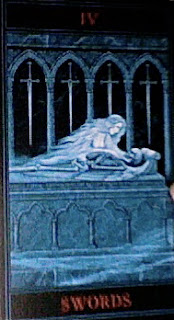 The four of swords is a card of rest.  The card of exile, of self seclusion, of truce and of weariness.

I've been getting this card in abundance as of late.  It's telling me I need to step back and rethink a few things, to let go of the defeat and breathe.

You could consider this card a card of meditation, as that's what it's trying to tell you that maybe you should be doing.  Stopping, accepting and reorganizing.
Sometimes this place of rest is a forced one and other times it is voluntary.  Maybe you have just lost a battle of some sort or maybe you just won that battle, either way, you are depleted. Either spiritually, emotionally or on the material level.

I'm using the Gothic Tarot by Joseph Vargo right now.  Beautiful.
Posted by Domestic and Damned at 9:39 AM