iTunes Canada had it for download yesterday, but I had other things going on. 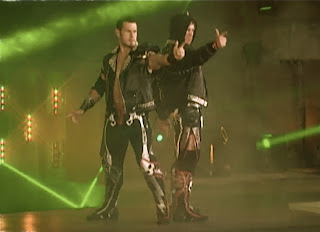 The show opened with a match between MotorCityMachine Guns!  and Ink Inc.   To be honest, I didn't really pay much attention to the rest of the show after they were done. 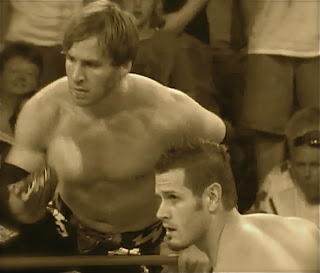 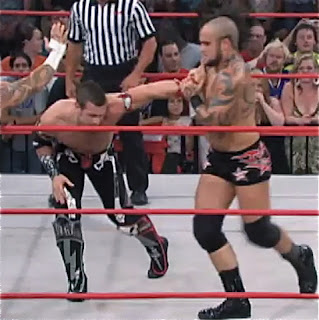 Alex Shelley and Shannon Moore started it off with a collar tie up, which Moore turned into an armbar, before Shelley rolled out reversing it.  Moore then used a single leg take down before stomping repeatedly on Shelley.  Moore was going for what looked like a figure four leglock but Shelley pushed him off and he bounced off the ropes flipping over Shelley.  Shelley went for a cover but only got a one count before Moore used another armdrag to get him down on the mat.   Jesse Neal tagged in and they double teamed Shelley with an underhook.   Moore tagged back in, once again working on the left arm of Shelley. Just when it looked like Shelley had things turned around, he got tossed out of the ring.   Chris Sabin jumped in then only to miss with a clothesline and get tossed out as well from Moore who had used a spinning head scissors.  The MMG then double teamed Moore with their high-low combo, with Shelley pulling on the neck of Moore and Sabin with the baseball kick.  Sabin went for a cover but only got a two count.  Sabin then planted Moore face first into the double boots of Shelley who was using the second rope for a swingset. Both Guns!  then working on the arm of Moore before Sabin landed an elbow to the chest of Moore.  Moore tried to turn it around with a back flip on Sabin but landed hard himself.  Both Neal and Shelley tagged in,  with Neal getting the shoulder block on Shelley. He followed this with a couple of clotheslines before Sabin ran back in, and landed a crossbody on Sabin. Neal then gored Shelley but only got a two count.  Moore ran back in only to get tossed over the top rope by Sabin who then waved at him.  Cute! Right before Sabin ran face first into a modified blackhole slam from Neal. Team 3D were then at ringside giving the Guns! just enough of an edge to land their trademark double teamed slicebread on Neal, with Shelley getting the cover for the win.


Next week will be the ppv, where the MMG will be going against Beer Money Inc for the tag titles.
Posted by Domestic and Damned at 10:28 PM