iTunes Canada had it for download this morning and well here we go...
The new rankings for the #1 contender looks a bit better but I still don't think Hardy or Anderson need to be in it.
Abyss came to the ring with a side of beef.... huhmm did someone read my vampire story I have up on my blog cause.... moving on 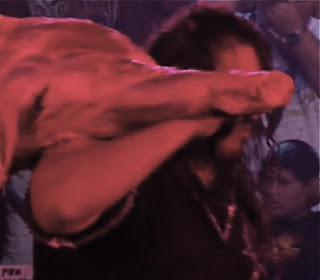 Oh god your favourite vegetarian ghoul is about to vomit that's so gross  Abyss! that's just.... he started biting into the damned thing right there in the middle of the ring... Dude that's just not healthy

Brian Kendrick vs Doug Williams in a non-title match.  It's actually nice to still see that belt on Williams, I like his style.
This was an I quit match, Kendrick started off strong with a series of kicks and forearms, but Williams used an Irish Whip sending Kendrick into the corner to get a slight advantage. He followed this with a short clothesline. Kendrick did try to battle out, but it didn't get him very far. Dude you really need some new tights cause those look like a diaper honestly just even change the colour to something other then white  Williams slapped on a few suplexes and a gut-wrench but kendrick held on for a bit with a few drop kicks of his own, then tried to get the cobra clutch on getting Williams to quit.

Nice to hear Taz actually call a few moves and do his job considering I seem to be calling half the stuff wrong.   You know what, if this prompts a few more actual moves to be called during a show then we're one step closer to bliss right?

Desmond Wolfe vs Rob Terry vs Samoa Joe.  Wolfe was being dragged across the ring like a character in a horror movie... I thought it was cute.  Joe got the win with a rear naked choke on Wolfe.

Matt Morgan the evil druid vs Pope.  You know if anyone in the X-Division locker room ever wanted to show me their love, I'd still really dig that wicked trenchcoat of Pope's.   Pope made short work of Morgan getting the pin.

Jay Lethal vs Jeff Hardy.... Hardy won and I think Lethal was robbed on that one.

And the MotorCityMachine Guns!  that is a thing of beauty is it not. The MMG with the belts.

They went up against Beer Money Inc in  round one of a best of five. This was a ladder match.  I hate ladder matches. 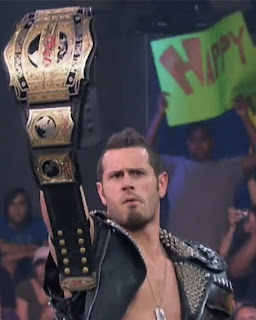