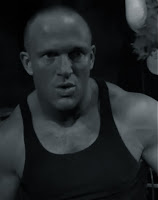 Eric Young! Or as I like to say Mr. Yummy,   this is a guy I would gladly share a bottle of Screech with.  I love that he's come back to the humour!

A.J. Styles... dude, I thought we talked about those bad cuff links you had in your ears.  Get rid of them!

Hardy/Anderson vs Morgan and two security guards.  It's well documented that I am not a fan at all of Jeff Hardy, but I am a fan of his tummy.
Morgan walked away letting Hardy get the win over his tag partners.

Dreamer vs Abyss in a weapons match... HATE IT!!!!!
Too much crap this week not enough matches.

Then Raven! came out and beat on Dreamer licking him.  Truly the highlight of the evening. 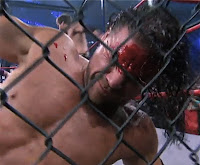 And the MotorCityMachine Guns! they went up against Beer Money Inc in the 3rd round of their best of 5 series.
BOYS! all four of you - A frealing cage match!  The four of you are doing this to drive me insane aren't you?  I hate these matches and I'll tell you once again why 1) they are dangerous! one wrong move/slip/bad landing  and god only knows what kind of surgeries are needed  2) they are impossible to call.
The MMG creeped in the back up over the cage to "surprise" BMI.  Both landing in sync, Chris Sabin with a cross body on James Storm and Alex Shelley with a cross body on Robert Roode.  They threw Storm face first into the cage then continued to do the same with Roode. 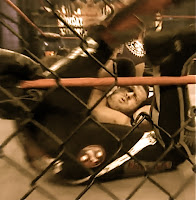 Shelley then with an inverted atomic drop on Storm just before Sabin taking the knee out of Storm setting him up for their double team basement drop kick. Sabin then used Shelley for their step ladder move landing another drop kick to Roode who was still up against the cage wall.  Shelley then with a series of forearms to the face of Storm, then a swift mule kick setting up for his trademark Sliced Bread, but Storm got out of the way landing Shelley in the corner. Roode then pushed Shelley who landed off kilter on the second turnbuckle letting Storm charge into his back. 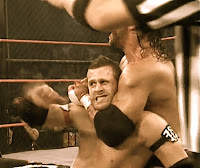 Roode then tagged in with a kick to Shelley's chest. He then started with straight up punches to Shelley's skull keeping him down on the mat. Storm quickly tagged back in, and they doubled teamed Shelley for a few minutes. Storm then with Shelley in the corner again giving him a hard sounding slap to the jaw.  Another quick tag in by Roode who got Shelley down on the mat with a snapmare and a chin-lock submission move.  Shelley managed to fight out of it with a few punches and a large kick to Roode's skull.  Too bad Shelley was floundering and ended up in the wrong corner for a moment.  Roode then picked up Shelley and powered him back into the far corner once again, but Shelley got hold of that long hair of Roode's and slammed the back of his skull few times on the cage wall. Good reason to cut the hair. Shelley then with a wicked hurricanrana off the top turnbuckle.  Finally Sabin tagged in,  as did Storm.  Sabin with a bunch of rapid running forearms for both members of BMI, before delivering a double drop kick to them both from the top turnbuckle.  Told you, he's half monkey. Sabin then piled Storm up on Roode in a tree of woe, with a high kick to Roode and his trademark hesitation drop kick to Storm. He then used his trademark tornado DDT on Storm off of Roode in the corner, going for a pin but only got a two count.  Shelley ducked a clothesline from Roode and was heading once again for sliced bread but Roode countered, getting Shelley tangled in the ropes and cage. Roode then out of nowhere with a insideout clothesline on Sabin who landed on his teeth.  Yes, his teeth. Roode turned his attention back to Shelley who was at the top of the turnbuckles, and the two traded elbows before Shelley did a variation of his sudden stop face first into the cage wall, and Roode fell hard to the middle of the mat. Shelley then with that double stomp he's been doing as of late, right to the chest of Roode - from the top turnbuckle!  Storm in the far corner set up nicely for their running step ladder move, both men landed a few on Storm before Storm moved out of the way, causing Sabin to crash and burn. Storm then managed an eye of the storm on Shelley tossing him almost into the cage wall.  Roode then got Sabin up on his shoulders driving him back first into the cage wall, then turned around letting Storm get a back breaker on Sabin.  They went for a pin but only got a two count.  Both BMI decided to climb out of the cage then, Shelley spotted them and got between the two, delivering elbows to each as they all three tried to climb out of the cage at the same time. Shelley then with a jawbreaker on Storm off the top rope. Then Sabin climbed to the top of the cage for a crossbody on both BMI.  Shelley then off the top turnbuckle and they each pinned a member of BMI for a double count and got the win.