Normally I have this rule about not coming near the computer after I decide to go to bed for the night, no matter how bad my insomnia gets but, tonight I'm on the computer.  Why?  I'm not sure.
Not as if I'm getting any of my work done, just drifting around in circles checking emails and stuff.  Just one of those nights.

3:13  A number that is popping up alot as of late.  In numerology that breaks down to 7.  The number 7 in Tarot is the Chariot card (war, triumph, vengeance, trouble, riot, dispute, defeat, travel, balance, combining) the 7 of Wands is about battle, the 7 of Cups is about dreams, the 7 of Swords is about planning/spying, the 7 of Pentacles about harvest.  See a bit of a pattern here?
The 3 is the Empress, (motherhood, earth, loving and domestic) The 3 of Wands is the card of business, the 3 of Cups the card of joy/feasting, the 3 of Swords of heartbreak, the 3 of Pentacles of trade/skilled labour.
The 1 is the Magi card (skill and the force of your will) the Ace of Wands and Ace of Swords are both cards of male energy, (fertility cards) the Ace of Cups and Pentacles of female energy (creativity) all four of the Aces are cards of birth and of the seeds of creation.  Ace of Swords being about a champion and fighter, the Ace of Cups about true love and union, the Ace of Wands about birth/origin in general and the Ace of Pentacles about manifesting into the physical.    Again all connected to beginnings. 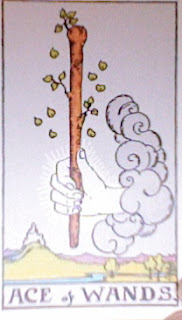 The ace of wands even looks like a phallus.   Yeah it's just one giant phallic symbol.

It seems everytime I look at the clock it's 3:13.  The last couple of addresses people have given me have been 313.   The bus I need to get to the cinema is the 313 bus.
3am is said to be the true witching hour.  It is in combination with 3pm which is the Christ hour.

I hate it when I can not sleep.
Posted by Domestic and Damned at 3:52 AM