iTunes Canada had it this morning but if you read my last post on my personal blog, you know I was out all day.
You know how much I really do not care for flashbacks,  well we opened with one this week and it was a good flashback for once.

We opened with a Global title match between A.J. Styles and Rob Terry.   Kaz was ring side with Styles, and helped with a cheat giving Styles the win and the title belt.

Kurt Angle vs Hernandez.  This was part of Angle's contenders challenge, making his way up the ranks to the #1 spot.   Angle was #8 and Hernandez was #7.   Angle slapped on his trademark ankle lock forcing Hernandez to tap out.

Samoa Joe vs Jeff Hardy.  This became a time limit draw where neither won.  This might turn into a good feud over the next few months if TNA are smart enough to let them.

Matt Morgan the evil druid vs Mr. Anderson.  Anderson won with his mic-check but Morgan slammed him hard in the skull with the ceiling microphone after the match. 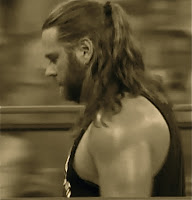 And the MotorCityMachine Guns! vs Beer Money Inc  in round 2 of the best of 5 series they have going on.  This was a street fight.  Yeah, you know my feelings on these types of matches.  I hate them!  Is it my imagination or is James Storm getting better looking each week?   The Guns! came running down the ramp, or I should say, Chris Sabin came running down the ramp suicide diving INTO the ring over the top rope to land on Storm, while Alex Shelley limped his way down the ramp and carefully got into the ring through the ropes to a waiting Robert Roode.  See you're hurt do not even make me yell at you for the ladder match that was on last week's episode.   Sabin and Storm jumped back out to the floor while Shelley and Roode battled a bit in the ring. Then Shelley tossed Roode onto the ramp, where upon Roode kicked Shelley in the face.  Kicked the bubble gum right out of his mouth. 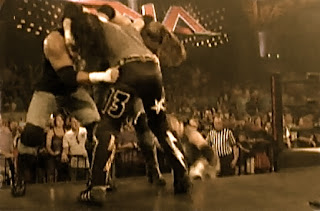 BMI tried to double team Shelley but Sabin stopped them tugging Storm off the ramp. Shelley then got Roode against the ropes of the ring. Both Guns! then used their trademark step ladder move in turn on Roode (four hits in all I believe) 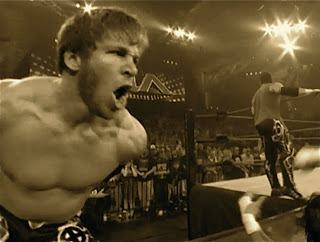 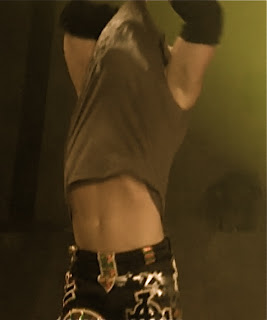 then only after Sabin stopped to give everyone a strip tease with the removal of his shirt he performed one hell of a hesitation drop kick on Roode. (and the line mommy I'm stuck comes bashing into my brain right now) Then did his impression of Brian Littrell from the Backstreet Boys (oh come on you were thinking it and if you weren't you are now)
Roode then fell to the floor and Shelley did that double foot stomp to the chest he's been doing as of late and made some noise as he did before trying a cover. 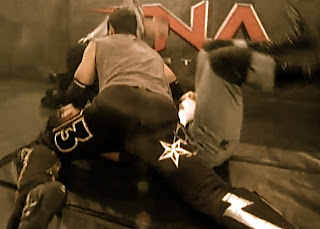 Roode kicked out.  Roode used a chair swinging for Shelley but missed getting the ring post.  Shelley then off the ring apron with a wild kick on Roode just before both Guns! got back into the ring, once again using their stepladder move to keep Storm out of the ring. Sabin suicide dove through the legs of Shelley only to be hit in the face by a steel chair from Roode. Then Shelley got slapped hard in the knee by the same chair. BMI then tossed Shelley back into the ring just laying in punches on him before Shelley managed to give Roode one of his dead stops into a steel chair on the second turnbuckle. He then turned around to get a jawbreaker from Storm who went for a cover but only got a two count. Sabin then with a drop kick on Roode into the chair. Roode with a hard spinebuster on Sabin, but it only got him a near fall.  Why is Storm always kicking Sabin in the ass? This is two weeks in a row where James Storm has just kicked Chris Sabin in the butt for no real reason?  Shelley then with a kindostick to the back of Storm and used it on Roode to help with a jawbreaker. Beauty. Ref down now and everyone outside the ring. Guns! then with a double moved slice bread on Roode in the ring but there was no ref. Storm knocked Shelley out with a beer bottle then used his trademark last call kick on Sabin letting Roode get the cover and the win.

Beer Money Inc are up 2 wins in this best out of 5 series.
Posted by Domestic and Damned at 10:35 PM