The DVD has been out a week Where's the Review???? Continued 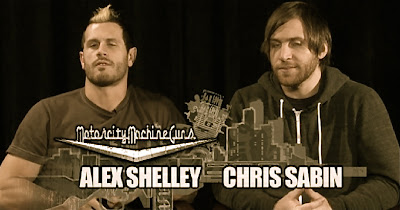 I know on Tuesday I said I would have the review up in a few hours.   But I was busy.
Well, I watched both parts of the DVD,  the Best of Beer Money Inc and MotorCityMachine Guns!
And you know what... I was bored.   Not sure I am going to do the review like I planned.  I was going to make it the next episode of Creeping Screams! (it would have been the second season of my BlindTag Video Reviews  first season of my Hurricanrana Report Video Reviews)  but to be honest, I'm just not up for it.  Not up for having to do my make up and hair, and power up the vid cam, and make a new set of opening/closing credits and new theme song and blah blah blah.
I also have 3 other wrestling dvds that are needing a review.   So at some point in the next few weeks I will get around to the second season of BlindTag Video Reviews First season of Hurricanrana Report Video Reviews (just the damned title of the show is a head scratcher)
Posted by Domestic and Damned at 6:44 PM