About those Tag Team Belts... Again 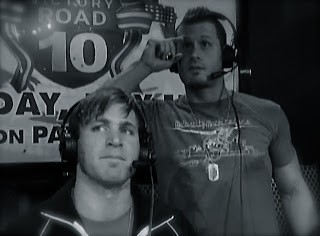 I have talked about this topic many times, and I'm just too lazy to check the blog for the posts to actually link them so... It looks like the MotorCityMachine Guns! are finally finally going to have a run with the tag team belts.
And do you know what that means.....?

It means not only will they finally have the belts which will make a spiffy fashion statement I must say, but it means I can shut up.  It means that I won't have a reason to nag them any more.  It also means they will actually have done something I wanted them to do.
Damn, I didn't think men actually listened to women, well at lest it's never been something I'm used to having.  But anyway,  yeah if they when they get the belts in a few weeks at the ppv, there will be nothing left for me to bitch about.

I mean that, there won't be a reason anymore for me to nag them.  I'll have to find another internet husband  another wrestler to pester... unless... they are going against Beer Money Inc,  about the only tag team that could beat them... but I'm not looking at things that way, no I'm looking at Mr. Shelley and Mr. Sabin gaining gold finally.

Mr. Shelley, Mr. Sabin  you go to the ppv and win the tag team belts and loose me; your favourite Canadian  (I think Petey Williams is their favourite Canadian) writer  (that's a bold statement as they haven't read any of my novels)   naughty librarian   (HOLY ANNE RICE NOVELS BATMAN WHO PUT THAT THERE???)   ghoul, your favourite  ghoul.  (I was just seeing if you were still awake with the librarian comment honest)
It'll be a win-win situation for you and a win-loose situation for me.
And if you do happen to loose,  then you're stuck with me for another year understood.
Posted by Domestic and Damned at 9:36 PM