Did we get new writers?

You've heard me say that I have looked at wrestling as one would a relationship. Part because, I was spending more time in the last few years wrapped around TNA's (Total Non-Stop Action) storylines and X-Division then I did putting any kind of energy into anything else,  and part because in season 5 of Sex and the City there is an episode where they are talking about love and boyfriends and paying tribute to the city of New York (this was the season right after 9/11) and the character of Carrie says that NY is her first love therefore her longest relationship.
It's let  me be a goofball writing about the wrestlers online in a way I couldn't have done about the real side of my little life.
You've also my Spudguns, heard me say the last year of storylines have disgusted and bored me to the point where I was watching more WWE for the first time in 12 years.  In relationship terms... I cheated on my husband (TNA) with my ex  (WWE).   Laugh cause it's stupid and cute. Well Okay, I'm stupid and cute. Weird and cute.  Damned and Sexy.

Today, I was even considering this week's episode (Feb 3rd 2011 episode) as being the last I watched, as this was the last one on my Season Pass. (I thought i had four more but I only had two on the prepaid pass) But, the last 8 minutes of the show changed my mind. Will I buy another season's pass, that's yet to be seen. Will have to give the next month a week by week trail I think, to see if it keeps up the way it ended this week.  Will it get me back to doing commentary online again? That too my Spudguns will have to wait to be seen.

All I can say is that A.J. Styles little rant at the end of the show had me smiling for the first time in nearly a year while watching the show.

Now before any of you start at me about how they are bringing in real life stuff onto the show,  I really don't care. Honestly, if the storylines are not made up fictional and are indeed 100% real or even 50% real stuff they decided to shock us with on air,  I don't want to know.
As far as this little Renfield is concerned, it's all reality tv and everything that happens on reality tv is scripted.
Wrestling, I've always said is interactive theater where the audience gets to be part. 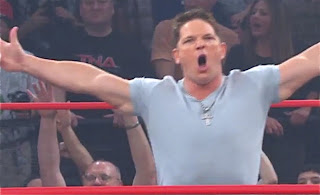 So yay to what must be the new creative team.

ooohhhh maybe the writers actually listened to what us fans have been bitching about all year???

Posted by Domestic and Damned at 1:39 PM