I have mentioned before about the Demand Events.  I get an update weekly for that and I see that Thunder Bay now has 12 people demanding a live TNA event here.
That's fabulous!  When I first signed up a year ago to that I was the only one.  I think the rule is something like 200 people before it is taken seriously.

I see someone has checked off "more TNA"  in a few of my posts reaction boxes this past week(the comment box does work now).  My sweet TNA Spudguns, I'm not ready to bring back full on wrestling reviews.  BUT however, I did make a promise  that I would get around to doing a review for the A.J. Styles vs Kurt Angle match as a "favourite match" when I had more time.   I never make promises unless I fully intend on keeping them.  So  here is that match in full review... 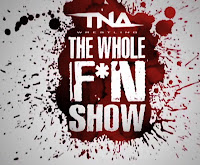 A.J. Styles attacked Kurt Angle just before the bell started, getting him down on the mat with a series of stomps before, tossing Kurt to the floor.  Styles then jumped out giving Kurt another round of stomps, followed by a couple of hard fists to the side of the skull. This rocked Kurt into the rails. He then slammed Kurt face first into the ring apron before breaking the count.  Styles then strutted right into an overhead suplex on the floor.  Dude, you know that's got to hurt. Back in the ring now, and Styles delivers a knee to the guts of Kurt, but was answered by a tilt a whirl back breaker. Angle then went for a cover but only got a half count. Styles then with a double chop to the throat of Angle, pushing him into the steel post where upon Angle fell to the floor.  Styles out of nowhere with a slingshot over the top rope nailing Angle. Styles then with a knife edge chop to the upper chest/throat of Angle. Back now in the ring, and Angle gets back into the groove with a series of heavy fists to the temple of Styles, then went off the ropes but Styles leap frogged out of the way. Or so we thought, as Angle from behind with another overhead toss. Styles lands on his feet, and then delivers a double dropkick to the face.  Styles went for a cover but only got a one count. He then went right back to Angle slapping on a chin lock. Angle managed to get out of the hold, getting Styles in a take down going for his trademark ankle lock but Styles kicked him off.  Angle then picked him up for a slam. Both to their feet again, with Angle dishing out a few short clotheslines backing Styles into the corner but Styles got a boot up to the face of Angle forcing him back a step. Angle then slaps on another overhead belly to belly.  Angle went for a cover but only got a two count. This then was backed up with 3 German suplexes by Angle who then smoothly went for another cover. Still only a two count. Another attempt at the ankle lock, didn't work. Angle in the corner again, Styles charges at him but Styles ends up on the apron. He gives a cheap shot thumb to the eyes of Angle then springboards back into the ring. A flying forearm to the face of Angle lets Styles try for a cover. Only got a two count himself.  A.J. then tried for his Style's Clash, but waited just a second too long and was swiftly tossed over head again in a back body drop to land hard on his back. Styles answers with a paylay knocking Angle to the mat and going again for a cover. Once again only getting a two count. Styles to the top rope then but Angle charged at him, both missing.  Angle then to the top rope with a moonsault landing perfectly on Styles with a crossbody. Another two count but Styles kicked out. Angle then went once more for the ankle lock but Styles wormed out of it, tossing Kurt into the second turnbuckle face first.  Styles on the apron going for another springboard but was cut off in mid move, landing back on the apron. He then used a combo from the corner, springboarding/twist onto Angle, and turning into a reversed DDT. Still, Styles only got a two count. A.J. distracted for a second, and Kurt came up behind him putting him into another Angle Slam. Another two count. Styles tried for a lowblow behind the ref's back, but was caught by Angle and the ankle lock slapped on tight. Styles tapped out, giving Angle the win. 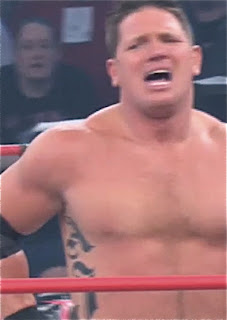 Posted by Domestic and Damned at 7:31 PM