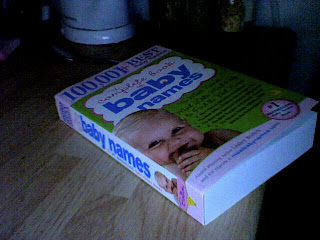 The book of baby names that I got as a thank you for the book reviews I have been doing the last while,  came this morning.

I had to look a few up.
Trust me this will come in handy for my writing, as I have mentioned that I tend to use the same four or five names all the time for my characters.  I've been poo-pooed by my friend Erin the evil one for that more then once.

Now, I knew my own name -real first name- meant  "royalty".  I did not know that my real middle name meant "a woman graced with God's favour".   That's a nice thought isn't it?

And what does Ardeth mean you are thinking.... "field of flowers"   only the way I spell it is not listed in the big book of all knowledgefullness.    I first saw the name Ardeth in a novel by Nancy Baker called "Night Inside"  about a woman who is turned by force into a vampire and how she deals with her life then after.
There are 13 alternative ways to spell Ardeth according to the baby names book,   my version is not among them.
Posted by Domestic and Damned at 12:04 PM