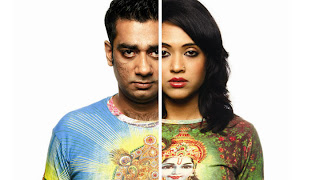 I just watched this documentary on iTunes. Now, you've heard me say before that I am a documentary freak. Been known to rent dvds of movies I've had for years on vhs just for the commentary. (best rock-doc I have ever seen was Metal: A Headbanger's Journey )

This film Love in India left me confused. It seemed to ask more questions then actually explore anything. I didn't learn much from it other then the fact Gods/Goddesses are so interwoven. But, we already knew that.
This talks about society's double standard on marriages in India, as well as the most popular mythology in regards to sex/love. Parts of which sounds very similar to that of Dionysus (the interwoven gods part) and left me feeling kind of disappointed.
We follow the film maker and his lover over a course of time (we never find out how long they were shooting for) as they interview friends and family about their personal views on marriage, and the lack of sex education classes.

I'm not sure I walked away from this one liking or hating it. It's one I wouldn't mind seeing again and having someone to discuss it with.

Sidenote: it's a subtitled film.

Originally posted on my other blog on April 26th 2010
Posted by Domestic and Damned at 12:13 PM