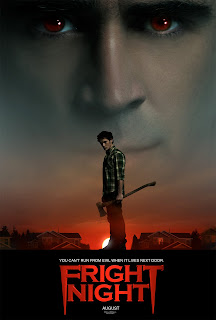 It doesn't take much to figure out that I'm little excited like a lab rat on a cheese tray about the remake of Fright Night that comes out next week.
If you've been paying attention to my blogging in the last while, you know I started off with iffy feelings about this film.  The original being almost 30 years old is a classic in the genres of both vampire and horror.  The sequel which was released in 1988, has become a major cult classic in it's own right.

I'm drooling here you know that right...slobbering all over the computer keys thinking about my favourite sidekick Evil Ed getting a revamp -all puns intended- and my favourite scared slayer  Mr. Peter Vincent getting a make over as well.

Also, if you've been paying attention you might realize that I've been doing a few vampire reviews over on my *new* vampire blog the last few weeks.  Some people get enchanted by the superbowl, I get enchanted by a new vampire movie.  Actually, there is usually one movie a year that gets me this excited, to the point of planning my schedule around it's opening night.   This is this year's movie.
Posted by Domestic and Damned at 8:31 AM