Looks like it will be a lovely morning.  Have reached chapter 12 of Persuasion,  the part where Louisa falls.  Very intense.  Or you know not so much.  Book club is tomorrow so I need to finish reading it tonight.
I did something the other night, on Thursday that I have done maybe once in my life, walked out in the middle of an episode of wrestling.  There what last year I walked away from an episode of TNA but I finished watching it a few hours later.   Thursday, I was watching WWE's NXT and I'd had enough.  Soon as the Tyson Kidd match was over I just turned off the tv and that was that. Enough already and why the hell have we not had any eliminations in the last two months?
NXT has become the biggest waste of time in the last few weeks. Biggest waste.
I actually really like Tyson Kidd matches, he's one of the few that are worthy of a show.  But it's the rest of the show that drives me to the remote.
In the immortal words of Blackadder's Bladrick, what we need is a cunning plan.
It's early, no real news and since I've cut back on my coffee intake in a desperate attempt to start eating better again, I tend to be in zombie mode more. The withdrawls are a bitch I'll tell you that.
Well, suppose I should read another few chapters and get ready to face the day. 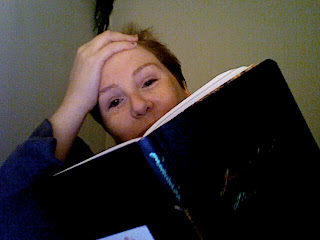 Posted by Domestic and Damned at 8:47 AM