Seriously have a million things that I should be doing but just do not feel like it.
I went back to watch last week's (Jan 6 2011) episode of TNA Impact, and have to ask... 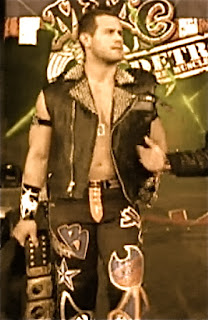 Is it the pants, or is it just my personal wishful thinking, cause Alex Shelley looks like he might have FINALLY gained a few pounds.

Now, as much as I tried, I could not get a good clean screen capture of him without his ring jacket so the shot I did get will have to do.

The last few years, I have honestly been wondering if the man is okay, as he seemed to have gotten too skinny and at too quick of a rate.

So much information is out there for  women who have eating disorders, but too little is talked about men who have it.
It is a lot harder to diagnose in men then it is in women, specially athletes.

Ever since the tragic death of Corey Haim last year, I think more and more fans are realizing how delicate the lives of their heroes really are.  We put so much pressure on them, specially athletes like wrestlers who do not have off seasons, to be over the top superhuman.

So I guess I'm asking Mr. Shelley... am I right on this one or is it just the damned pants?
Posted by Domestic and Damned at 7:46 PM