Return of the Silliness... Part deux

I used screen capture for this post
Mr. Shelley, Mr. Sabin, I am starting to think that you are making it your life's work to make it my life's work to talk about the pants.
I keep asking where the red and black ones are that I think are groovy, but yet I haven't seen you wearing them since.... July.
I think I figured it out. Why you're digging out all the other sets of pants you've had made in the last few years... it's because Fortune have commandeered the colours of red and black haven't they?  I think they have.  They all seem to be sporting the red and black like its going out of style. 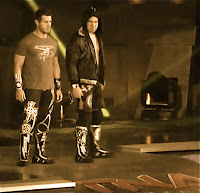 (The screen capture is of the blue/silver trippy hologram pants.)

Now, next item ... What the hell is going on?  Is there a wedg(i)e being driven between my tag team? Two nights in a row that one of you MotorCityMachine Guns! greeted a superkick with your chin. Dude, I mean man that's two separate trips to the dentist that is.
I mean, righty-ho, to singles belts we go.  Yes, I did say on my wrestling blog few weeks ago, I would like to see Mr. Sabin go for the TV Title as the Heel, but I did NOT mean to rip my tag team to shredded wheat.

Lesson of this silliness is, it's not about your wrestling style or ability, it's all about the pants. Yes, I'm fixated on the pants. Wouldn't you be????? Lest  Mr. Sabin isn't wearing the same old brown pants to the ring as his "on set street clothes"  that he wore for all of 2009.

WHILE I HAVE YOU HERE... Oh my!  Is Mr. Shelley okay?  I was just watching the episode of Impact from Jan 13th 2011, and he looked like he dislodged something in his neck or dislocated his shoulder at the end of that match.
Probably a good thing I do not have kids, as I react like this towards seeing a professional wrestler get hurt If I had kids I'd be needing tranquilizers if they got injured; or a hanged nail.
Posted by Domestic and Damned at 11:36 PM