So I read your blog

I caught this week's issue of the MotorCityMachine Guns!   Spike blog. (Losing the Belts and Traveling)   Mr. Shelley, it's a good thing you do not work in  a hospital. You'd go insane with the germs.

It was slightly random, but I'm just happy they blogged again. Just happy.
I do feel sorry for their top commenter this week, poor dude got yelled at by some craphead - not me, I've only ever left a comment once on there few months ago when Mr. Shelley said he has an eating disorder.

Mr. Sabin's half was... well to the point. I'm not sure if he was angry or just... in character to be honest.

And why do I feel the need to blog this you're asking?
Um cause hello, that's what I do.  I make weird notes on here in regards to the MMG.  It's what I'm known for.  I am the Queen of my own Dorkdom and love it.

Besides, I've got a very odd blogging goal of 666 posts by Feb 14th.  And since I haven't been blogging as often I needed something to yammer on about.  That and I just wanted my boys to know I did read their blog.  I check it every week. Let them know someone notices and cares, even if I'm not leaving a physical comment on their actual page.
Which of course they already know, as they read this when they have nothing else to do or when they can't sleep and are unable to take a sleep aid, or when they are sitting killing time in an airport or something.

At lest they don't do what my cousin does and read my blog when they're in the toilet.... god man at lest I hope they don't cause that would be weird.

Anyways where was I?  Oh yes... Mr. Shelley, Mr. Sabin good to have you back.   And we'll talk about those missing belts later, over coffee. 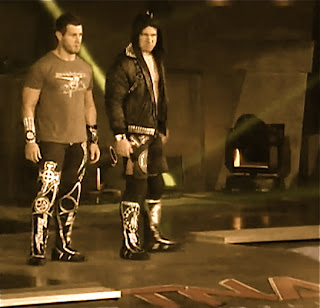 Posted by Domestic and Damned at 8:15 PM