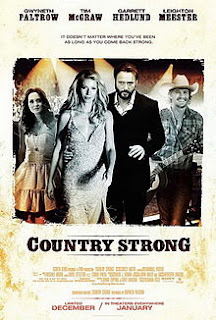 I've been hanging onto a free movie pass that was about to expire.  So I braved the psycho cold to see the movie Country Strong
All I have to say is, this is the chick-flick movie we should have gotten last year (Sex and the City 2 and Eat Pray Love promised big things but let fans downs.)
This was hands down, one of the best dramas I've seen in over a year.  Now, you know I'm not one for musicals, it's not my thing, but Country Strong was handled in such a way that you forget your watching a musical.  It's that good.

I'm still trying to wrap my head around the fact people were surprised to see Gwyneth Paltrow singing... She sang all her own character's stuff in Duets back 2000. (the movie about the karaoke contest)

Plot: Kelly Canter is the biggest country singer around, and fresh out of rehab. Her husband/manager is doing everything he can to repair both her career and their marriage, including taking her on tour with two fresh hot opening acts-Beau Hutton and Chiles Stanton- In just under a month, we see the return of the star she was, the rise of Beau and Chiles as well as the love triangle that forms. Can Kelly once again rise to the top, or will she fall under her own stardom leaving her new tour mates to pick up the pieces?


The twist ending was one even I didn't see coming.  This is one film, that I know I'm going to be buying in a few months when it comes out on DVD, and I am thinking I need to track down the two part soundtrack soon too.

One thing I have to say about having gone today to see it,  and that was simply put the woman who showed up with her 2 kids both under the age of ten.   This is NOT a family film. Though it is light on language and mild on sex scenes,  it still is a darker film with it's overall topics of addiction, cheating, and emotional abuse.
Posted by Domestic and Damned at 6:54 PM