Suicide.
A masked character that I've made comments about in the past.
Spudguns, do we have a head count on how many wrestlers actually have worn the Suicide costume?  I stopped counting after two. 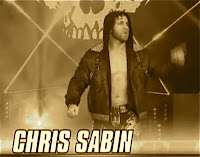 So, I was watching the show for this week (April 7th 2011 episode) and got my attention up for the X-Division match.  Then I heard the theme for the MotorCityMachine Guns!  and my pulse quickened.  Then realized that it was only Chris Sabin.  sorry Mr. Sabin no offence meant.  Who did however wear one of the classic red/black designs. Spiffy, very spiffy.
The announce team made a slight off handed comment about Alex Shelley not being there, with no reference to his injury just that they were focusing on the X-Division right now and not the tag team division.  THEN  we see Suicide come into the ring.

Hmmmm.
Okay could be anyone under that thing.  But, something made me think  Alex Shelley.
I honestly have zero clue if he's back from his injuries or not.  As I've said few times in the past,   A) I am in an area that can not get Xplosion the other TNA show and   B) I do not read up on them outside of the Spike site.

But, there was a gesture.   Suicide was down on the mat on one elbow and raised his other fist shaking it.   Nothing original about that, as a few of the guys do that to get their barrings/signal to the other wrestlers.  But, I've never seen Suicide do that before.

I have however seen Mr. Shelley do that in every single match he's had when he hits the mat after say a clothesline or an enziguri. 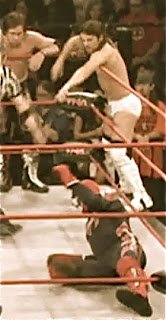 There was also a grunt when Suicide had Robbie in the corner. And Mr. Shelley is one of the more vocal wrestlers... hhmmmm