Right, I've been yammering on for a while now about wanting to do a challenge much like Julie Powell did with the year long cooking-blogging challenge she did back in 2002, where she worked her way through the book Mastering the Art of French Cooking vol 1  by Julia Child  AND that I want to get around to trying some of the challenges they have been doing over the years on Top Chef.

You also know that I'm searching for .... something.  Something that will ... I don't even know.  And to break out of my writer's block so I can finish my novel.  I'm at the point where I'm wondering if this novel which I've spent two full years on already will ever be published.  Okay, no crying or freaking out about the novel right now, cause crying and freaking out about the novel right now will not help at all.

This week marks a few things for me.   April 18th (Monday) is the 1year mark for this blog.  And April 19th (Tuesday) marks the 12th year mark of my Grandmother's death.
I've got nothing special planned for the blog at all as it's just a blog. 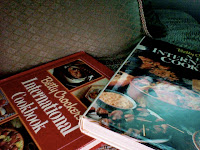 I'm going to try to swing doing the Vending machine/gas station challenge from Top Chef this week.  I think.  Mom has a few doctor's appointments this week which will put me firmly in a few places that will have vending machines.
As far as the cookbook-blogging challenge goes... I might have found the perfect cookbook... in my apartment!  I have two different versions of the Betty Crocker International Cookbook.  The first one from 1980 and the 1989 version.  At first I thought they were the exact same but the 2nd version (is it the second edition or later?) has a few more recipes in it and is a bit easier to follow.  This ironically has been one of my favourite cookbooks for years.  I've made recipes in the past from it. 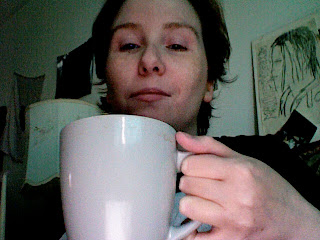 I won't be able to get into gear yet on that project simply because of the money issue, but it's on the TO-DO LIST.

Okay Spudguns, I've been blogging all day (did a book review and a wrestling review and the dishes)  I really need a coffee.
Posted by Domestic and Damned at 7:08 PM