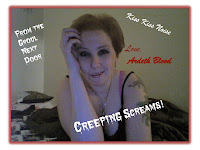 It's been a long time since I did one of these Eh?  Yes indeedy it has.  I had some time this afternoon, and thought with the ppv tonight, what the hell, I'd throw in a few comments.

As you know my Spudguns, I've not been happy with TNA for the last year, which accumulated with my total meltdown last summer.  Mr. Shelley, I actually have to thank you for sparking that, it was a health blessing in disguise.

I rarely watch the whole show anymore. the show at normal speed, as I fast forward through it most times.
So with that said....


We opened with a flashback from the week before.  It was nicely edited that's about all I have to say on it.
The ring the was filled with crap... er Immortal. They blah blah blahed for over 6minutes before Mr. Anderson came out for his five minute beat down.  This brought us to the 10minute mark of the show.
We then went to some of the Knock Outs.  Seriously, this storyline sucks goatballs between Sky and Winter.  Just end it all ready.  PPPPSSSTTT  Velvet,  Salt is to Zombies what Garlic is to Vampires.
Then we find ourselves peeking in on more crap with Immortal.  Seems the "Network" is not happy.  Okay laying bets here, the Network will end up being....oh hell I have no frealing clue. Throwing a name out there for the hell of it... Raven. 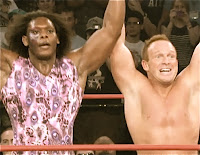 Match#1- Crimson vs Orlando Jordan vs Jesse Neil vs Williams  Of course, Stiener, Young, Moore and Magnus were at ringside.  Now, if you caught my comments the other week, you know I am dubbing Young/Jordan the Trans-Can-Connection  wither they like it or not. Embrace it, it's good for you.
I know this was suppose to showcase the teams before heading into the ppv tonight, and it should have been the highlight of the night but it was just handled like dog dren.  I was sort of pissed off by the lack of anything surrounding this match up.  The only good thing was that Orlando Jordan got the win and we got to see Eric Young do the funny.


Match #2- Matt Hardy vs Kazarian.  Their crews both came to the ring but rightly so were banned from ringside. This was the first of a series of matches to see who would have the upperhand at tonight's ppv.  Hardy got this win.


We then had to sit through the Knock Outs again... Tara and Rayne threatening Mickie.


Match #3- Jeff Jarrett/Pope/Hernandez vs Samoa Joe/evil druid Matt Morgan/Kurt Angle.   Pope cheated to get a win over Joe.
Jarrett and Karen then ran for the streets.  This brought us back to the ring, with more crap between RVD and Immortal.  Then Sting, the bedazzled champ came to the ring with a live mic.  Bored now.

Match #4-Abyss vs James Storm.  This is the second match in the best of series for the ppv upperhand. Again, this had a slight chance of being the highlight but was just too casual.  Abyss got this round for his team.

Little more of the office scenes with Bishoff trying to weasel out who is in the network.
Then there was some more with the Knock Outs.  Sky, I'm telling you toss the salt.

Match #5- Mr. Anderson in a gauntlet match  He faced A) Murphy, and got the mic-check  then B) Rob Terry came in, another mic-check for the round, C) Gunner then up, and you guessed it another mic-check by Mr. Anderson then D) Bully Ray ran in for a few minutes. Then this match sort of broke down.  Bully Ray tossed him to the floor, dragged him to the stage, and was about to finish him off when Sting came out.


Honestly, bit of a disappointment this week.  The tag match involving half the X-Division had promise of being the highlight, as did the James Storm match but both were handled wrong.
Posted by Domestic and Damned at 5:24 PM