So I got this dvd 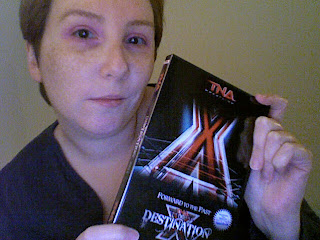 Which I will be uploading a video review for ... most likely tomorrow...
I've been wanting to get back to doing dvd reviews.

And for anyone who read my thoughts on that particular ppv back on July 10th  {yes I just realized all these years I have forgotten to point out links in my posts because I'm me} Then you know I stated I believed at that point in time, that Alex Shelley had not won an Ultimate X match at all.  It has been pointed out, that Alex Shelley has indeed won 3 previous Ultimate X matches via tag team rules.  {so the question remains, did he get the X or did his tag partner Chris Sabin ?}